UK Indian entrepreneurs Alok Mathur and Melvin D’Souza are men with a mission – they want the Indian wine industry to make it big on the international stage, just like the Indian curry industry.

It may seem a big ambition especially when 10,000-odd Indian restaurants in the UK sell wine worth £180m every year – and almost none of it comes from India! But not for these Birmingham-based entrepreneurs who are set to plug the gap in the international market for Indian wine.

Their Indian wine importing firm Soul Tree Wines has just been shortlisted for the Start-up Business of the Year Award at 2012’s National Business Awards.

It all started in 2009 over a meal in an Indian restaurant in the UK when Mathur and D’Souza spotted a significant niche in the market -- curry-lovers in the UK were forced to consume either Indian beer or French wine, there was essentially no Indian wine available to them.

At the same time they were aware of a burgeoning Indian wine industry.

With a strong business management background (both Mathur and D’Souza are MBA graduates from the University of Oxford’s Saïd Business School) they were quick to spot the business opportunity.

Yes, the UK wine market is overcrowded with approximately 7000 different wine brands available but some gaps in the market stood out for the duo.

“The British have an ongoing love affair with curry,” says Mathur. It is estimated that the UK curry market is worth a whopping £4bn of which eating out is worth £3.6bn. “The last success story, as far as wine regions go, was Chile and that was 15 years ago; and finally, there are very few Indian wines available in the UK, and certainly none outside of London,” he adds.

Besides, there are the 10,000-odd Indian restaurants in the UK that can sell Indian wines. 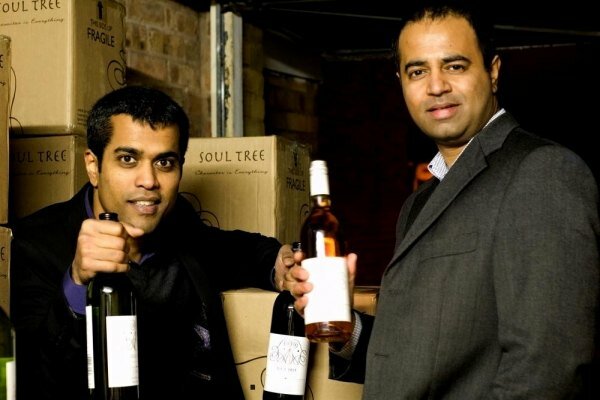 By 2011, Soul Tree Wines had launched its first Indian wine bottle and 20 months since, its wines have been listed in around 300 restaurants across the UK and are also available in France, Germany and Ireland.  And now the company has been shortlisted for a UK business award.

The Birmingham-based entrepreneurs’ first taste of success came when a Birmingham International Airport’s spokesman said:  “If this is what Indian wines are like, France had better watch out.”

But the duo’s journey wasn’t without its challenges.

“Funnily, neither Melvin nor I have prior experience in the wine industry,” says Mathur. “This made the experience incredibly challenging as we were forced to learn – and fast!”

The pair had to learn everything from the technical aspects of wine to how the industry operates and the learning curve was quite steep.

And to top it, they were caught in the thick of the global financial crisis.

“The recessionary environment meant that consumers were drinking in rather than out, or moving to cheaper wines,” D’Souza says.

The recession also had a major impact on the liquid funds available in the marketplace for start-ups like theirs.

It is said that great business ideas are often sparked by simple observation and Mathur’s and D’Souza’s Indian wine venture is a telling example.

Neither Mathur nor D’Souza was a wine connoisseur from the start. “We were introduced to wines a little late in life (we grew up in India, after all!),” Mathur says.

But the two entrepreneurs appreciate and share the excitement that drives wine enthusiasts crazy. But what drives them most is the dream to see Indian wines make it on the world stage.

Ask the duo what they have learnt in the last couple of years from their experiences in the Indian wine industry, fascinating facts and stats come thick and fast.

“The wine market in the UK is worth about £14bn,” says D’Souza. “The UK is also one of the largest importers of wine in the world, and one of the top ten countries for wine consumption.”

Meanwhile Mathur says: “Wines are intensely associated with their region of origin – which is why people drink French wines in French restaurants and Spanish wines in Spanish restaurants.”

“This holds true for other drinks too, think Cobra/ Kingfisher in Indian restaurants or Sake in Japanese restaurants,” he adds. “This means every drink has its place, given the right context.”

The UK also has one of the highest numbers of adventurous wine drinkers who are consistently seeking out new wines and new regions, according to the Soul Tree Wines founders.

“Therefore we don’t see Indian wines necessary as being ‘special’ but as being ‘different’ and having a unique niche in the world,” Mathur says.

It is the entrepreneurs’ ability to merge statistics and market gaps that makes Soul Tree Wines a promising Indian business in the UK.

“Most people are not aware that India has been making wine not just for the 20-odd years that the modern Indian wine industry has been around, but for thousands of years!” says D’Souza.

The duo has a graphical chart to explain this.

“Most of Europe and Asia saw their vineyards being wiped out to an epidemic in the late 19th century and while Europe quickly imported and reinstated the vineyards, India -- probably on account of the political turmoil at the time -- saw the industry go into hibernation for about a century,” Mathur explains.

Although they tasted wine a little later in life, it is clear that they have developed a deep understanding on the subject when they say: “The levels of residual sugar in Indian wines vary, of course, and we have further adapted the wines such that they have not lost their Indian characteristics while being more in tune with British tastes.”

While UK supermarket racks are a distinct possibility in the future for Soul Tree Wines, it is the duo’s primary aim to complete the contextual Indian dining experience with Indian wines.

Despite being a small start-up, Mathur and D’Souza represent the growing number of UK Indian entrepreneurs who are concerned about farmers’ welfare and corporate ethics.

“We work closely with farmers and our winemaker with a ‘custom crush’ to produce these wines at wineries also producing their own wines,” says D’Souza.

Both Mathur and D’Souza get involved in all aspects of day-to-day business in their UK office.

“We do everything from writing code for our website to making sales calls, and from struggling with accounting to being our own design and print company doing table cards or wine lists,” says Mathur.

“A hectic pace of activity, an open bottle of wine, and very late night” is how the pair describes a day at work.

Mathur and D’Souza are aware of the peculiar and tacit pressure attached to “understanding” wines unlike with any other drink known to mankind.

“While this works for people who are trained and can actually detect nuances in the ‘nose’ and the ‘palate’, the pressure probably ruins the enjoyment for almost everyone else,” says D’Souza.

“Long, complicated French-sounding names such as Chateau Fo….Beauj…. that the average person finds hard to pronounce do not help either,” adds Mathur quickly.

Their word of advice: “Focus on enjoying the wine without necessarily complicating the experience or being dragged into discussing its nuances after the first sniff or taste.”

Surely, in the case of Mathur and D’souza, a little liver abuse has taken them closer to their ambition - putting Indian wines on a global map and introducing Britons to a total Indian dining experience.