Diwali 2013 will be celebrated by Indians across the world on Sunday, November 3, 2013. Like every year, UK Indians will be treated to Diwali fireworks, feasts and tradition at London’s Trafalgar Square, and Swaminarayan Temple as well as in Birmingham, Manchester, Leicester and other UK local areas. 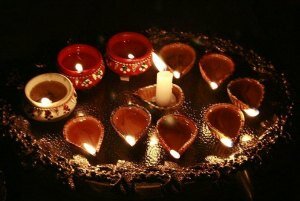 Trafalgar Square Diwali celebration is one of the biggest and most popular highlights of Diwali celebrations in the UK. Thousands of UK Indians throng the historic location to enjoy traditional feasts, arts and cultural activities, Bollywood entertainment, and most importantly the spectacular fireworks organised by the Mayor of London.

Trafalgar Square Diwali 2013 will be celebrated on Sunday, 27 October, 2013 between 2pm and 7pm. While fireworks will be the major attraction of Diwali at Trafalgar, there will also be contemporary music and dance from community groups and professional artists, traditional Indian food and entertainment for children.

London’s Diwali festival is presented by the Mayor with the support of Diwali in London Committee, its organising partner.

Diwali, the Indian festival of lights, is celebrated with fire crackers, cultural entertainment, colourful lanterns, traditional rangoli, sweets and traditional attire by Indians across the world and Indian communities will mark the occasion in the UK with same traditions and enthusiasm.

Neasden’s BAPS Shri Swaminarayan Mandir will recreate the Diwali magic for UK Indians with its Diwali 2013 celebrations. The Mandir will host one of the largest Diwali and Hindu New Year celebrations in the country to help Indians enjoy the traditions, colours and rich culture of the festival. The programme, on Diwali Sunday, includes deity darshan, a more traditional Chopda Pujan at the Haveli Assembly Hall between 6pm and 7pm and will conclude with stunning fireworks at Swaminarayan School Grounds from 8.30pm to 9pm. The temple will also serve hot snacks to visitors at its food stalls from 5pm on Diwali day.

To improve visitors’ experience of enjoying Diwali celebrations 2013, the London temple will also operate a special “Diwali Day Bus Service” from Neasden Station to the Mandir every 10 minutes from 3pm to 8.15pm. It will then be suspended until after the fireworks display has ended. The service will re-commence running every 8 minutes from the Mandir to Neasden Station until the last bus at 10pm, the temple organisers have said.

Another temple, ISKCON’s Bhaktivedanta Manor will hold cultural programme between 2pm and 6pm on Diwali day this year featuring candles, lamps, rangolis and cultural activities. It will also include a colourful stage show with drama and traditional dance and elaborate fireworks displays. Manor’s “Grand Fireworks display” will kick off at 6.30pm on Sunday, November 03.

Meanwhile, Diwali 2013 will be celebrated in Leicester too with the local government authority switching on the Diwali lights on October 20th, 2013 followed by fireworks and traditional activities on Diwali day.

UK Indians in Manchester too will be treated to traditional Diwali 2013 celebrations on Saturday, 16 November between 6.30pm and 9.30pm at Gandhi Hall, Brunswick Road, Withington, Manchester.

The festival of Lights will also be celebrated in other UK areas such as Slough, Southend-on-Sea, Coventry, Wellingborough, Wolverhampton, Preston, Nottingham, Luton, and Loughborough among others.

Further afield in Wales, the First Minister of Wales, Rt Hon Carwyn Jones, and Hon Consul of India in Wales, Raj Aggarwal will host a Diwali reception at the Senedd, Cardiff Bay on Friday, November 1.

Diwali celebrations in India are never complete without elaborate feast featuring traditional cuisines and sweets and colourful rangolis. In its bid to recreate the traditional feast magic, Dishoom, the Bombay café in Covent Garden and Shoreditch is hosting a “Diwali at Dishoom” day -- a day of storytelling, festive treats, rangolis, fun and celebration on Sunday, October 27th.

Storyteller Vayu Naidu will give a spellbinding performance of the Diwali story at 11:30am at Dishoom Covent Garden. Visitors can transform themselves into a character from the epic with face-painting, and Dishoom (assisted by artistically inclined children) will bring a bit of festive colour out on to the street with a collaborative rangoli - the giant pavement patterns that are traced across thresholds and pavements in India during festivals.

Dishoom’s resident paan-wallah will be serving handmade sweetpaan, an Indian digestive with spices and candied fruits to complete the festive traditions.

The restaurant’s Chef Naved Nasir has also created special vegetarian and non-vegetarian Diwali menus that will be available between Monday, 21st  October to Sunday, 3rdNovember at both its branches. Offered as a full menu for two, the Diwali Feast is £29 per person, and the Vegetarian Feast is £26 per person.

Watch this space for updates on how Diwali 2013 will be celebrated in your local area in the UK. Let us know how you will celebrate Diwali in the UK by writing to us at .