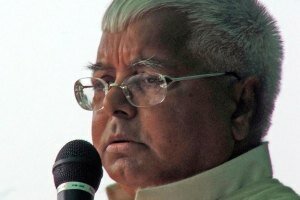 65-year-old Lalu Prasad, who was Bihar’s chief minister between 1990 and 1997 and also central government minister (Railways portfolio) between 2004 and 2009, faces jail sentence for his involvement, according to the CBI court judge Pravas Kumar Singh’s verdict delivered on September 30, 2013.

Lalu Prasad, among others, was found guilty of corruption in the fodder scam and charged with stealing state funds meant for cattle fodder during his tenure as Bihar chief minister.

The ex-CM of Bihar will be sentenced on Thursday, October 3, 2013 and could face jail for between four and seven years.

Lalu Prasad, who founded Rashtriya Janata Dal (RJD) in 1997, also faces disqualification as an MP and will not be able to contest elections for six years.

His disqualification is a result of the new Supreme Court ruling that that MPs and MLAs convicted of a serious crime must be removed from the office. The landmark SC ruling, announced in July this year, was hailed as an important step in cleaning up Indian politics by scratching the clause that protected convicted politicians.

Alongside, Lalu Prasad, 44 other accused in the fodder scandal include high-profile and prominent politicians such as another ex-CM of Bihar, Jagannath Mishra, and few IAS officers.

Lalu Prasad’s guilty verdict and subsequent jail sentence is seen as a blow to his party RJD in the next general elections of 2014.

RJD spokesman Manoj Jha has confirmed that the party would challenge the court order in a higher court when more details of Lalu Prasad’s sentence is revealed next week.

One of the biggest corruption scandals of India, the fodder scam was brought to light in 1996 after it emerged that several administrative officers and politicians of Bihar state were involved in stealing vast amounts of money meant for livestock fodder and agricultural purposes.

The Bihar fodder corruption is said to involve fraud of more than 900-crore rupees to the Indian government treasury by politicians and civil servants.

So far, about 500 individuals involved in the fodder scandal have been punished.

Lalu Prasad is one of the 45 officials to be charged with submitting fake fodder bills and withdrawing cash to the tunes of 37-crore rupees.

Although the scam was exposed in 1996-97, the full scale of the embezzlement was not known at that time.

The scam allegedly went on from the late 1980s.

Lalu Prasad was Bihar’s chief minister at the time when the scandal came to light was charged of corruption and criminal conspiracy in the fodder scam. Lalu Prasad, one of the prime accused, subsequently resigned from his post but denied the corruption charges.

Alongside him, another former CM, Jagannath Mishra is a prime accused. Mishra too will face a sentence on Thursday, October 3.

What do you think of the special CBI court ruling on ex-CM of Bihar Lalu Prasad Yadav in the fodder scandal?