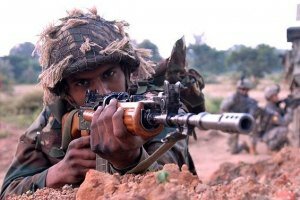 India has accused neighbour Pakistan of crossing the Line of Control (LOC) and killing two of its soldiers in the region’s most tense and disputed territory – Kashmir . India has also summoned Pakistan High Commissioner to the Indian Ministry of External Affairs to complain about the attack.

But Pakistan’s military officials have denied the allegations.

According to India, on Tuesday, its patrol was attacked by Pakistani soldiers near Mendhar at the LOC -- the border area that divides Indian and Pakistani-controlled parts of the disputed Jammu and Kashmir region. A firefight broke between the two troops which led to the death of Indian soldiers -- Lance Naik Hemraj and Lance Naik Sudhakar Singh.

According to the foreign ministry, regular Pakistani troops crossed the LOC at Mendhar sector and engaged the Indian troops who were patrolling this sector.

“Two Indian soldiers were killed in the attack and their bodies subjected to barbaric and inhuman mutilation,” Mathai said.

The Government of Pakistan was asked to immediately investigate these actions that are in contravention of all norms of international conduct and ensure that these do not recur.

Mathai recalled that the experts of both countries had met in New Delhi only in December to discuss conventional confidence-building measures (CBMs), wherein maintaining the sanctity of the LOC, one of the most important CBMs between the two countries, was emphasised.

The external affairs ministry has called the latest act “highly provocative”. The incident is likely to further strain the relationship between the two countries as both nations have launched a series of measures last year to ease the tension. In September, India and Pakistan entered into an agreement to relax visa regime to ease travel between the two countries for some citizens.

However, since late 2011, both countries have revived their efforts to improve bilateral relations.

While there has been a ceasefire in Kashmir since 2003, Kashmir has been a contentious issue with both countries fighting for it ever since independence in 1947.

The India Pakistan LoC shooting row intensified after Pakistan's military officials claimed that a Pakistani soldier has been killed by "unprovoked" firing by Indian troops near the LoC, the BBC has reported.