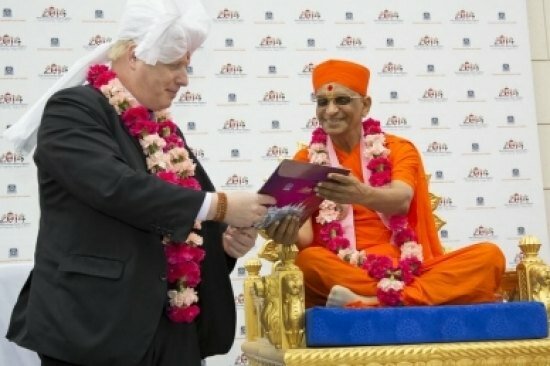 While there, the Mayor was a sport in donning traditional Indian headgear – which is called turban, pagdi or feta. The Mayor was also garlanded and given the red auspicious tilak on his forehead by Hindu maharaj --Acharya Swamishree Maharaj.

“Delighted to meet congregation and view progress at Kingsbury Temple. Fantastic cultural addition to NW London,” Johnson said on Twitter and shared a picture of him sharing a light moment with Indian women dressed in traditional Indian finery for the opening event. 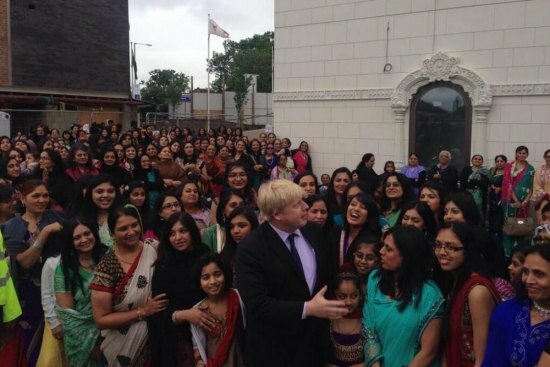 “London is the world’s most diverse city and what better example of that diversity than what we see here today - a traditional, magnificent Mandir on ones side of the courtyard and a modern sports and community centre on the other,” Johnson told the audience there.

The Mayor was there to witness the building of the new £20m e complex – Purushottam mahal, which is set to fully open in August.

When ready, Purushottam Mahal will be used to provide facilities for the popular community base activities currently being run from Golders Green SSSSM Temple located at the junction of Finchley Road and Helenslea Avenue, the temple confirmed.

Swaminarayan Temple purchased the McNicholas House site in Kingsbury from Skanska towards the end of 2008.  The site is located at the junction of Townsend Lane and Kingsbury Road and covers an area of 1.84 acres, according to the temple.

The Mayor was treated to a traditional dance performed by the young students of Shree Muktjeevan Arts and Culture Academy.