Indian Prime Minister Narendra Modi was given one of the most memorable and warm welcomes at Wembley Stadium in London on Friday as over 60,000 individuals from the 1.6 million UK Indians, 2,000 volunteers and 800 artists together made up the grand 'UKWelcomesModi' Community Reception. Yoga, Bharat Natyam, Odissi, Kathak, Kuchipudi, Yakshagana, Garba as well as classical music and national anthems were performed by gifted artists and renowned troupes. The Indian PM gave an inspiring speech as did British PM both emphasising stronger ties between the countries.

Watch the recording of the 4-hour 'UKWelcomesModi' Community Reception in Wembley Stadium here:

See pictures from the UKWelcomesModi Community Reception at Wembley here:

Indian PM Narendra Modi and UK PM David Cameron arrived on stage side-by-side to huge cheers from the crowd. Modi dressed in traditional Indian kurta in Ivory colour with a brown shawl. Cameron spoke about the magnificient contributions of the UK Indian community in Britain and assured Modi that Britain will help it achieve its infrastructural and digital goals. Cameron concluded with 'Namaste Wembley' and 'Kemcho Wembley' and even said: 'Ache din zaroor aayenge'. 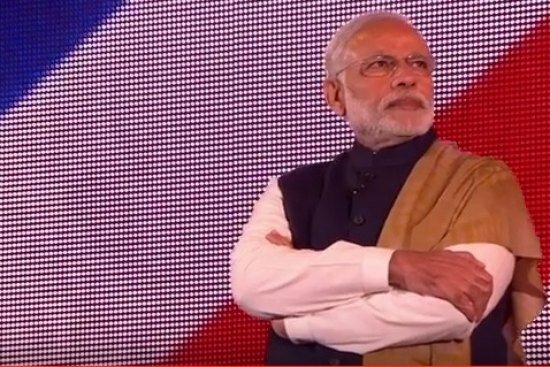 Modi, in his hour-and-a-half long speech, wished UK Indians Happy Diwali, praised Cameron, announced rupee bonds in the UK and emphasized the deeper ties between the two countries. he also spoke passionately about India's bright future, its youngsters and his government's initiatives around toilets in all Indian schools for girls and electricity across all villages. He also announced direct London-Ahmedabad flights to huge cheering from the Gujarati community present in Wembley. 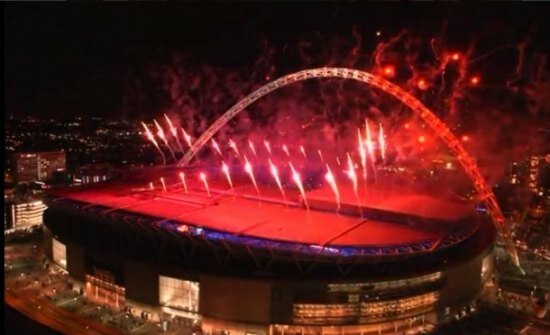 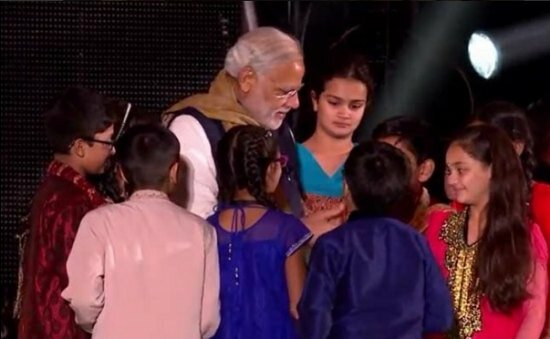 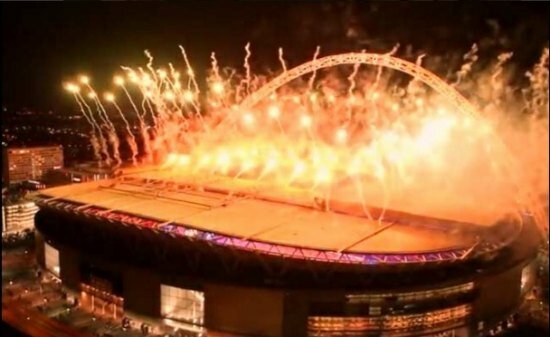 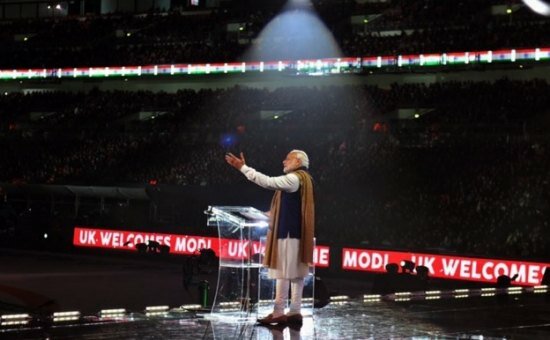 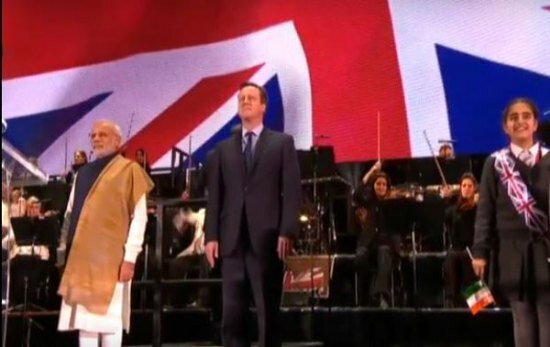 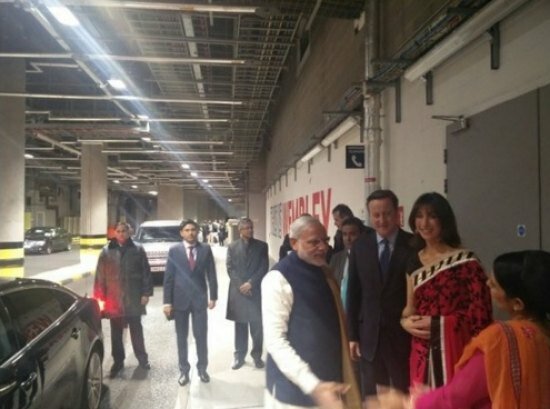 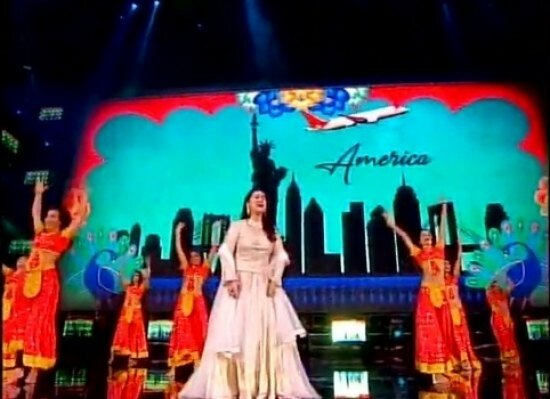 Singer Alisha Chinai performing her evergreen Made in India song 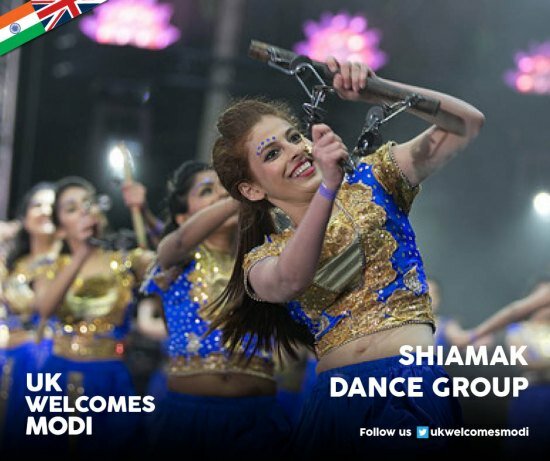 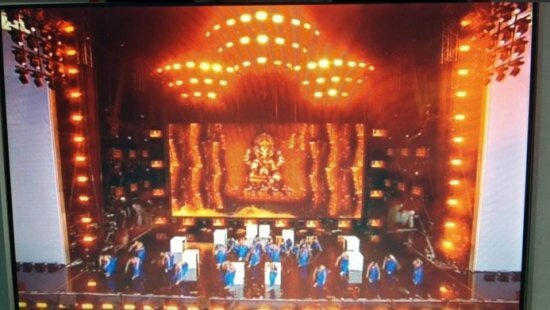 Live dance performance by resident Indian artists and a large portrait of Lord Ganesha
Celebrating India's cultural richness - Kathak, Kuchipudi, Oddisi, KathakKali performed on stage by a mix of troupes at Wembley for the Indian PM 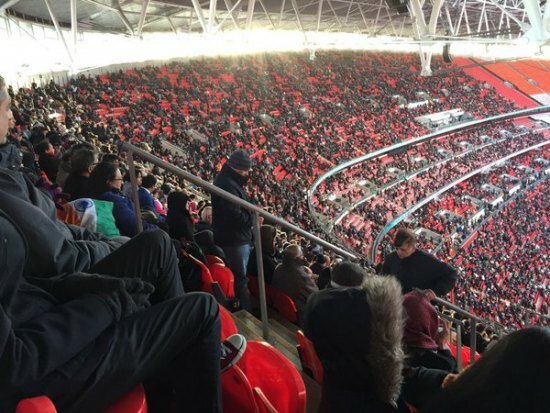 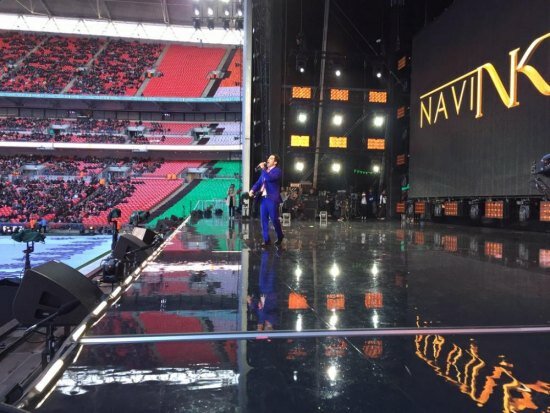 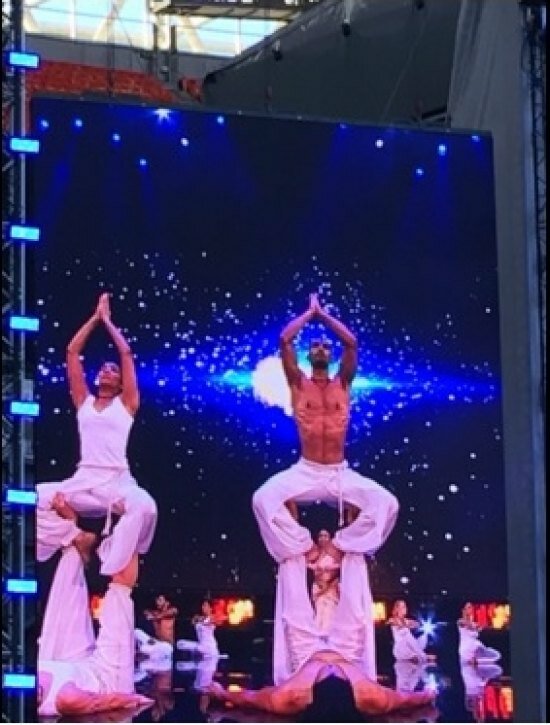 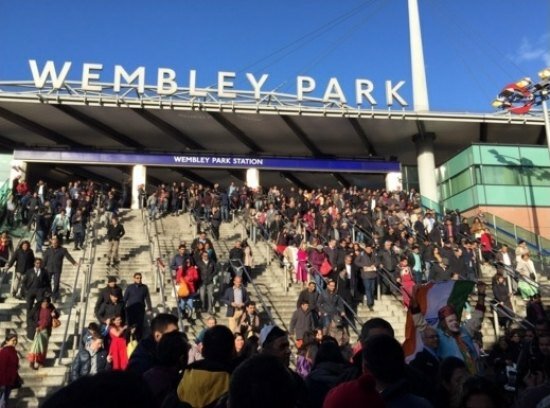 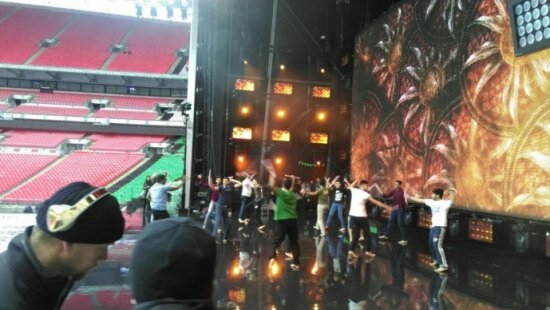 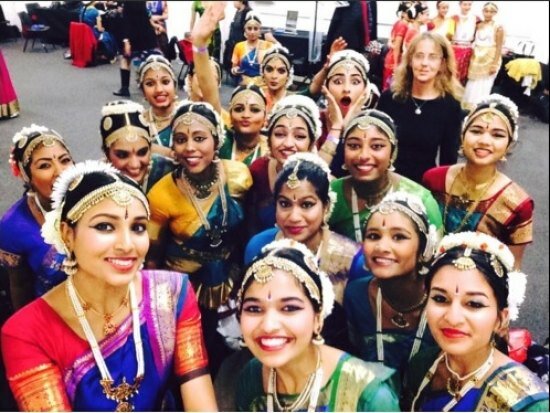 The elaborate and colourful Rangoli creation in the middle of Wembley stadium as part of giving Modi an Indian welcome in the UK. Also, enthusiastic UK Indians already taking seats ready for the event to start 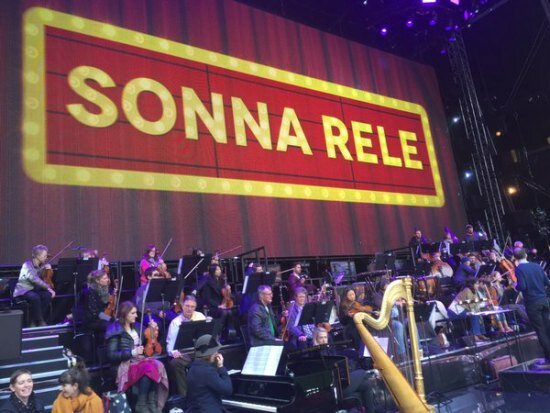 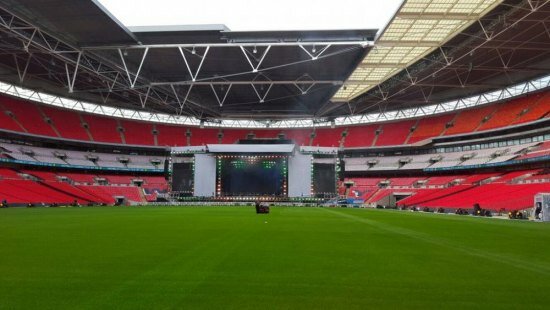 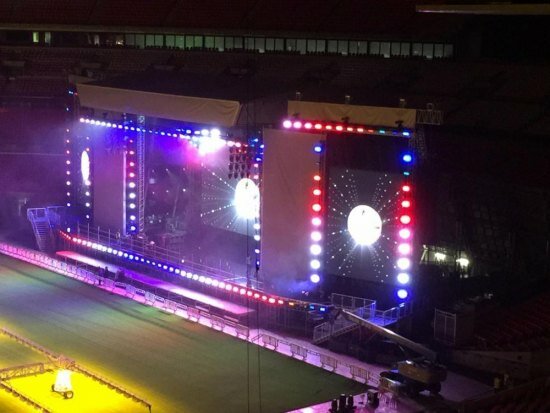 As part of the preparations, a giant stage was set up at the heart of Wembley Stadium for the unofficial community reception for the Indian PM by 60,000+ Indian diaspora in the UK. Some of the artists that performed at the reception went to invite UK PM David Cameron to attend the community reception. 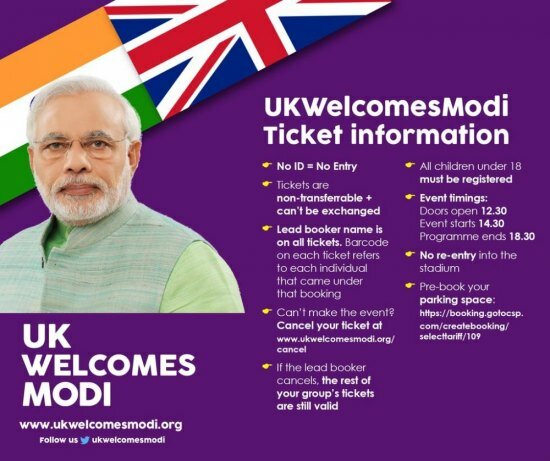 The organisers published a list of Dos and Don'ts and rules for the ticket holders and the attendees (such as 'No ID- No Entry'; no re-entry; tickets are non-transferrable etc.). Buses branded Modi Express transported Indian diaspora from Leicester, Manchester, Birmingham and beyond to Wembley for the Welcome Reception. The event, manned by 2,000 volunteers and planned for 112 days, closed with uber-grand fireworks at 6.30pm. 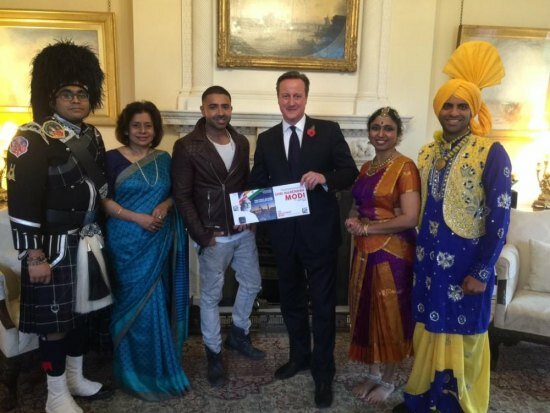 Coinciding with UK Indians' Diwali 2015 celebrations, the family-oriented community reception featured Bollywood song and dance, best homegrown British Indian talent, and a landmark speech delivered in the UK for the first time by Narendra Modi as India's PM. The welcome reception closed with a grand finale at Wembley stadium featuring the biggest fireworks display ever seen in Britain according to the organisers - Europe India Forum, a not-for-profit body that promotes India-Europe relations organized by the communities for the European Indian community.

"UKWelcomesModi" event brought together UK Indians to celebrate two great nations with one glorious future," the organisers say on the website. Over 300 UK Indian organisations including community associations, Dhruv Arts and Indian centres had signed up for the Modi reception initiative. The event is one of the biggest highlights of 2015 for the 1.6 million UK Indians living in Britain. 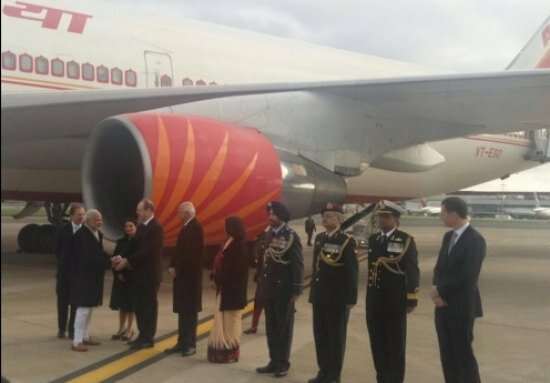 Modi arrived in the UK a day after Diwali day, after meeting the Indian Jawans at the border. As he left for his journey, he said: "Leaving for UK. I am hopeful this visit will strengthen economic ties between India and UK & bring more investment to India." 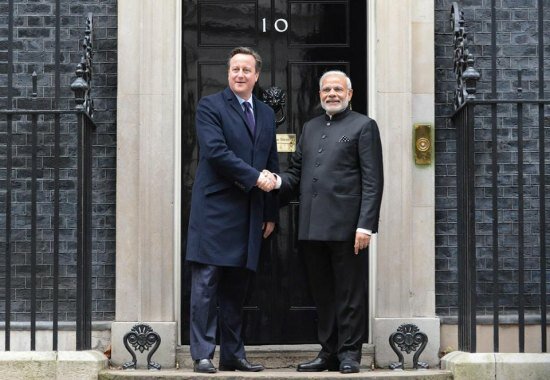 The Indian PM poses with British PM at the official UK PM residence 10 Downing Street
Narendra Modi meets Her Majesty The Queen at Buckingham Palace, London
Modi presenting Cameron with a pair of 'book ends' made of wood, marble and silver as a gift for the host 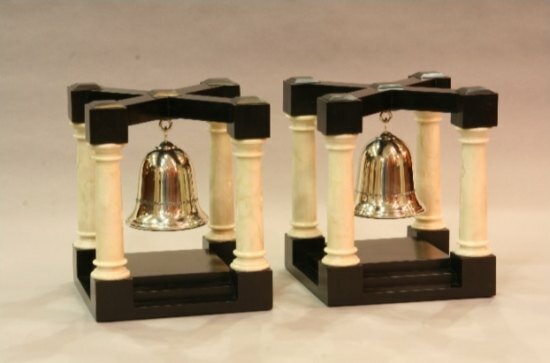 Modi also gifted Samantha Cameron an Aranmula metal mirror, a unique GI protected handicraft from Kerala, and some pashmina stoles. He gifted Her Majesty with a Tanchoi stole during his visit to the Buckingham Palace and lunch banquet there. 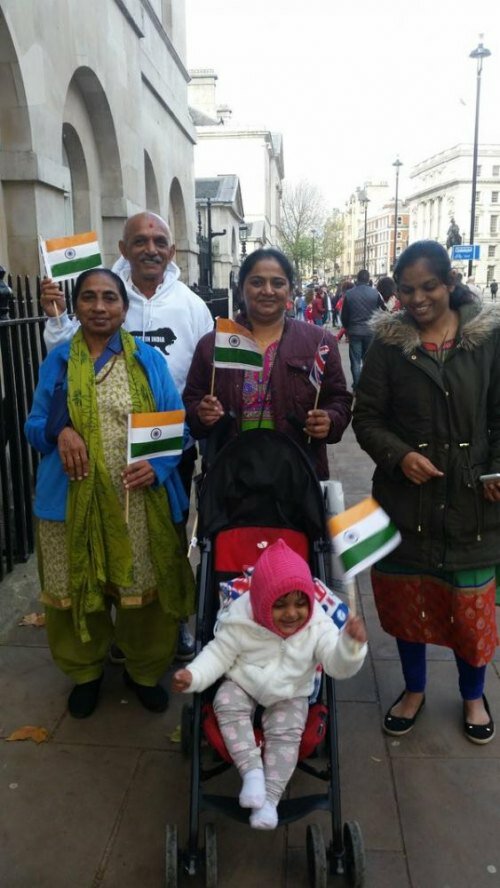 "We are very proud of the Indian diaspora in UK. Their role in strengthening India-UK ties is immense," Modi said while addressing the press in the UK for the first time in London as PM. 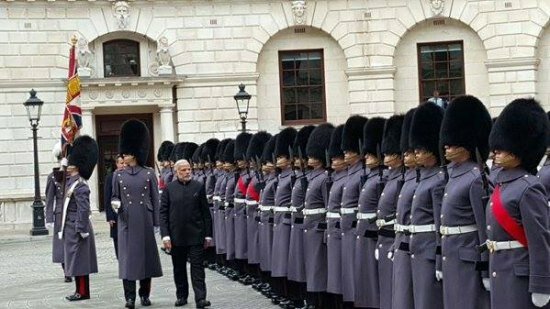 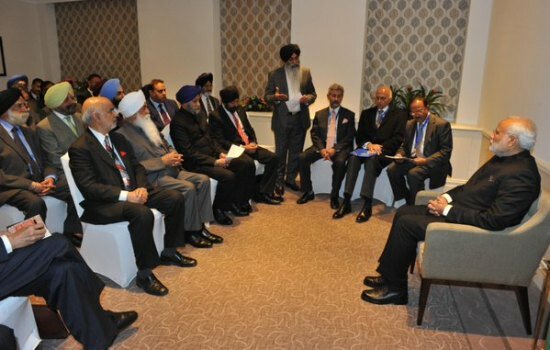 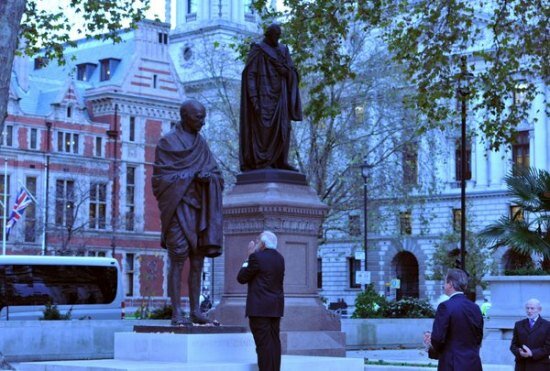 The Reception themed, ‘Two Great Nations, One Glorious Future’ will kick off with a specially produced cultural show featuring some of the very best British Indian artists.