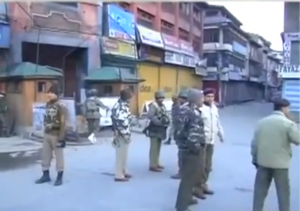 The UK Foreign Office has advised British nationals to carefully monitor the situation in Jammu and Kashmir before planning their visit. The advice followed the curfew imposed in parts of J&K after the execution of Mohammed Afzal Guru on February 9.

Afzal Guru was convicted in the December 2001 attack on the Indian Parliament and had been on death row since 2002.  After his mercy plea was rejected by president Pranab Mukherjee on February 3, 2013, Afzal Guru was hanged at Delhi’s Tihar Jail six days later.

Following his execution, there has been an on-going curfew covering the whole of Indian controlled Kashmir to prevent separatist groups from launching protest against the decision to execute Afzal Guru.

The UK Foreign Office cautioned Britons against all but essential travel to J&K since February 9and said that the advice is “still current” five days later on February 14.

“British nationals planning to visit Kashmir in the near future should monitor the situation and be prepared to alter their travel plans accordingly,” it said.

As part of the curfew there is a heavy police presence and additional checkpoints in towns across Kashmir, including in the capital city Srinagar, the Foreign Office’s advice read.

“There have been reports of sporadic protests taking place in Kashmir. British nationals residing in or currently visiting Kashmir should abide by the conditions of the curfew and avoid any large crowds or protests that may occur,” the advice document further read.

The curfew in parts of J&K have continued for the fifth day and so far three youths have died during violent clashes in Kashmir against the hanging of Mohammed Afzal Guru. There have been clashes in J&K's Sopore town.

Some internet services, mobile phone networks and television channels have been blocked by the authorities, the Foreign Office warned. The blocking of communications is part of the J&K authorities’ efforts to prevent more violence.

The police and security forces monitoring the curfew in J&K have also been warned against the use of firearms while dealing with angry crowds.

According to the Indian government, Mohammed Afzal Guru was found guilty of arranging weapons to help the attack on the Indian Parliament. The authorities also said that Guru was a member of the Jaish-e-Mohammed militant group – which was blamed for the attack.

UK has joined other countries including the US, Australia, Canada, Japan and Germany to discourage nationals travelling to J&K. According to the Indian media the discouraging advice is a setback to the J&K tourism which had improved in 2012.