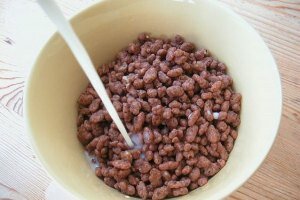 Which? consumer group’s study found that 29 out of 30 cereal bars from best-selling brands were high in sugar. One bar (Nutrigrain Elevensies) contained nearly four teaspoons’ worth of sugar (18g) -- more sugar than in a small 150ml can of cola (15.9g) and 20% of the recommended daily allowance.

Cereal bars’ healthy image is a myth, the study revealed.

Out of the 30 bars it compared, 16 bars contained 30% sugar and almost all barscontained high levels of fat and calories.

Even bars aimed at children had shocking levels of sugar, the study found. Monster Puffs, a cereal bar marketed to children contained 43.5% sugar, the equivalent of more than 2 teaspoons of sugar.

Six out of the seven cereal bars targeted at children were high in saturated fat which, if eaten in large quantities, it would raise cholesterol levels. Which? has called on the manufacturers to reduce levels of sugar and fat in food products marketed to children and wants tighter controls over the way these are promoted.

“People often choose cereal bars in the belief they’re healthier than chocolate or biscuits but our research shows this can be a myth,” said Richard Lloyd, Which? executive director.

“Manufacturers need to be much clearer about how much sugar, fat and calories are loaded in to each bar so people can make an informed choice,” Lloyd said.

All foods should have traffic light colour coding system so people can see easily what they’re eating and giving to their children, according to the consumer group.

Only few cereal bars it assessed lived up to their healthy reputation. The Nakd Apple Pie was the only bar that didn’t contain any added sugar. Alpen Light Apple and Sultana was the only bar to have three green traffic lights for fat, saturated fat and salt indicating that the levels were low – and also had the lowest calories overall.

Out of the seven, Weetabix Oaty Strawberry Crusher bar was the healthiest choice for children with its low salt content and medium levels of fat and saturated fat, according to the product-testing and consumer campaigning charity