On Thursday, December 12, Indian diplomat in the US, Devyani Khobragade was arrested in New York for visa fraud and for allegedly underpaying her housekeeper. The row between US and India has escalated since with India removing security barricades protecting the US embassy in the country and US barring Khobragade from entering America. Here’s the full story of Devyani Khobragade row. 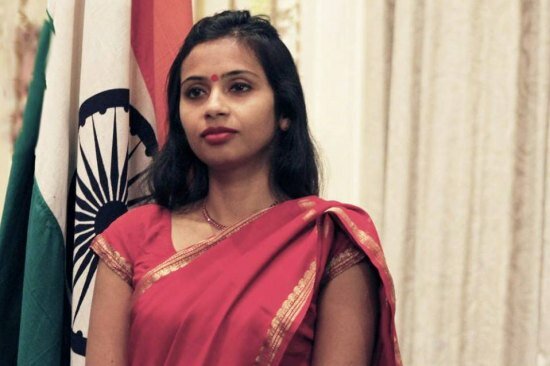 Diplomat Devyani Khobragade who is at the centre of a visa fraud row leading to US-India standoff
Image: Facebook

39-year-old Khobragade was India's deputy consul general in New York. She was responsible for Political, Economic, Commercial and Women’s Affairs in her capacity as a diplomat. She is married to New York-born Aakash Singh Rathore, a philosophy professor at Pennsylvania University.

On December 12th, she was strip-searched and arrested on charges of visa fraud as well as for making false statements about the salary paid to her housekeeper, Sangeetha Richard.

A federal court in New York heard that Khobragade stated on a visa application that she will pay the employed maid $4,500 (£2,746) a month but that she paid only $573 (£350) a month – which is far below the legal minimum wage in New York.

She also allegedly exceeded the maximum hour limit set forth in the visa application for the maid.

This led to her arrest on December 12th.

A day later, Khobragade denied the charges and was granted bail on $250,000 but the “humiliating and deplorable treatment given to an Indian diplomat” irked India and resulted in a standoff between the US and India.

It all started when Devyani Khobragade’s house-help Sangeetha Richard, also an Indian, went missing in the US back in June. Khobragade informed New York Police and Indian authorities. India then revoked Richard’s passport rendering her stay in the US illegal. In September, the US State Department asked India to investigate Richard’s claims of underpayment.

But Khobragade’s arrest on December 12, according to Indian media reports, involved handcuffing and strip-searching at 9.30 in the morning as she was coming back after dropping her daughter at school. Indian government termed the treatment “appalling”.

The Embassy of India in Washington expressed its “concern” over the action taken against Khobragade. The embassy urged the US to “resolve the matter with due sensitivity, taking into account the Diplomatic status of the officer concerned.”

As an IFS Officer and a diplomat, Khobragade is entitled to diplomatic immunity -- which guarantees such officials exemption from prosecution under the host country’s laws. But immunity is restricted only to acts related to consular duties and Khobragade does not have full diplomatic immunity, the US has said defending Khobragade’s arrest. The US also added that standard procedures were followed during her arrest.

Defending her arrest and how it was carried out, Manhattan Attorney Preet Bharara said in a statement: “Khobragade was charged based on conduct, as is alleged in the Complaint that shows she clearly tried to evade US law designed to protect from exploitation the domestic employees of diplomats and consular officers.

Not only did she try to evade the law, but she caused the victim to attest to false documents and be a part of her scheme to lie to US government, Bharara added.

Among charges Khobragade faces, she is alleged to have created a second (actual) employment contract for the housekeeper which was not to be revealed to the US government. In this employment contract, the amount to be paid to the maid was far below the minimum wage. Khobragade also allegedly deleted the required language protecting the victim (housekeeper) from other forms of exploitation and abuse, and also deleted sections that stated that as an employer, she “abides by all required US laws, Bharara added.

While India is silent on the charges of visa fraud made against Ms Khobragade, its anger and criticism is towards how the US treated an Indian diplomat – hand-cuffing in public, strip-searching and making Khobragade share a cell with “drug addicts”.

Prime Minister Manmohan Singh called Khobragade’s arrest “deplorable”. As a result of the Indian diplomat’s treatment, several senior Indian politicians including Narendra Modi and Rahul Gandhi, cancelled their meetings with the US delegates visiting India during that time.

That is not all – there were more reprisals ordered by India against US officials in the country:

In its response, the US has said the incident should not damage US-India relations and in turn described India’s reprisals “despicable” while defending Khobragade’s arrest.

The US has refused to issue an apology to India even as India demanded it.

In the second week of January, Devyani Khobragade returned to New Delhi after the US granted diplomatic immunity from visa fraud charges. But the US has indicted her and said she may still face an arrest warrant.

Meanwhile, India has expelled a US diplomat of similar grade from India to express its dissatisfaction with how the US has handled the diplomatic issue.

Staying in India, Khobragade has been barred from entering the US. As a result, she has expressed anguish about her family.

other Indian diplomats in the US have raised fears about more US action.

Meanwhile, it has also emerged that Khobragade is also an illegal beneficiary of the Adarsh Housing scam in India. She owns a flat in the Adarsh Housing scheme -- housing under government quota -- although she is ineligible. The rule requires the flat-owners to sign an affidavit that they do not own any other flat. But Khobragade owns an apartment in Oshiwara, Mumbai. She also owns over 30 acres of agricultural lands in Maharashtra state.

Last updated on January 12, 2014. Watch this space for update on the Devyani Khobragade case as it unfolds.