Debutant Syed Ahmed Afzal's Youngistaan gets my vote for two reasons—its makers had the grace to play a special tribute to Farooque Shaikh at the start of the film, and in its own ham-fisted way it exhorts the youth to vote. 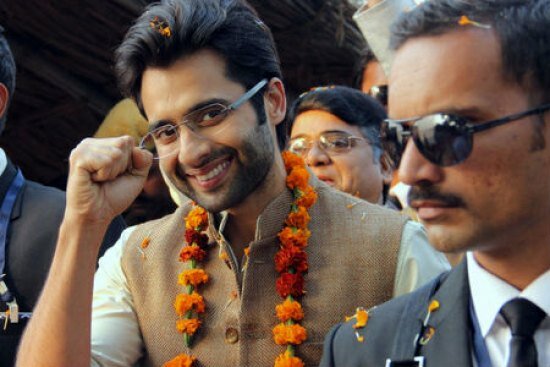 The film's politics though is strictly elementary school level. So that when Abhimanyu Kaul (Jackky Bhagnani) the 28-year-old interim Prime Minister of India stands before the United Nations to make a speech about his nation's pride in being a 'Sovereign Socialist Republic' it comes off as a passage from a 5th standard civics text book.

Before that, for no plausible reason but to put the hero at the helm, the party's high command—three old men huddled in a room and surprisingly reluctant to occupy the top spot—decide to install this gaming software developer in his deceased father's (Boman Irani) chair. In the real world we've had a government last for just 13 days whereas these people have six months to find favour with the electorate.

On the other hand this is exactly how Rajiv Gandhi, a former pilot with no political aspirations or experience was put in charge of the Congress party following his mother's assassination in 1984 to sweep the sympathy vote. His son, anointed PM-in-waiting for nearly a decade, hasn't come off any better than Bhagnani, a rich producer's son trying to give his fledgling career a respectable turn with a heavily promoted film that hopes to cash in on election season. I've seen the trailer nearly a dozen times, which, even for someone who spends a lot of time at the movies, is a bit much.

Yet the boy compensates with sincerity where experience and the script fail him—whether making that earnest vote appeal, respectfully decimating opposition within the party or reassuring his girlfriend Anvita (Neha Sharma) that everything will be ok. We never lose sight of the fact that he's play-acting in an amateurish drama and yet, now and then, he manages to hold attention on account of the humility he exudes.

The fiancée, on the other hand, is another matter. (One of the film's major problems is struggling to balance the sombre business of politics with a frothy love story.) At one level the writers accord her progressive ideas such as living-in with the PM and getting pregnant out of wedlock. She also continues to dress and behave like a regular girl (including throwing periodic tantrums as girls often do while the men try to be reasonable and responsible, or so Bollywood will have you believe).

But even for an endeavour as simplistic as this, it's a bit much to watch her sitting next to the boyfriend with wide-eyed ignorance asking, "Majority ke liye humein kitni seatein chahiye?" while counting is in progress. I half expected her to ask, "Uttar Pradesh kahaan hai?" but she only wants to know why winning the state is so important.

Standing firmly behind Abhimanyu is his political advisor and mentor Akbar (Shaikh) whose presence lends some seriousness to the proceedings. This isn't a performance he'd have been terribly proud of. And yet, it may be his last major role in a Hindi film with only Children of War to follow. Hopefully that should be a more fitting swan song.