In Queen, Rani (Kangana Ranaut) is dumped by her fiancé (Rajkummar Rao) on the eve of their wedding. While the family is still struggling to come to terms with this shock she locks herself in her room crying all night long. Then, on an impulse, she decides to avail of the honeymoon ticket to Paris and seeks her father's permission. "Jaana zaroori hai?" he asks. "Nahin," she replies, "Agar aapk manaa karenge to nahin jaaoongi."

In the next scene, the protective family that's never let her go anywhere without kid brother Chintu in tow, sees her off at the airport for her first foreign trip. 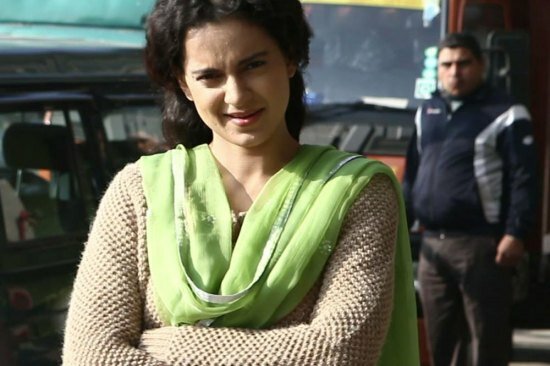 Kangana Ranaut as Rani in the film Queen

This scene in Vikas Bahl's Queen reminded me of a similar one in Aditya Chopra's Dilwale Dulhania Le Jayenge (1995). A young woman wants to take a journey by herself for the first time and asks her father if he'd let her go. In DDLJ, the London-born and bred Simran (Kajol) must chant prayers and appeal to the patriarch's emotional side to let her 'live' the last month of her life before she's carted off to Punjab to marry a stranger. "Kya aap meri khushi ke liye, meri apni zindagi se ek mahina bhi nahin de sakte?" she asks. The old man yields with the famous declaration, "Jaa Simran, jee le apni zindagi."

But here, Simran immediately grabs Raj's (Shah Rukh Khan) hand to get onto the train, falls in love with him on the Eurail trip and once again has to plead with father for her life. Although she seems smart and confident and is played by a blue-blooded actress known to be sharp-tongued in real life, her choices are never her own (as her mother fatalistically observes later in the film).

The man she loves wants the father's approval even at the cost of their relationship. She appeals to his better judgment too, but it falls on deaf ears, because family and honour are of paramount importance. Till the last scene her destiny hangs in balance as the two men fight, what seems like, a custody battle. Finally the narrative comes a full circle—the father lets go of her hand and the lover pulls her on the train once again, as if to reaffirm the boundaries of her existence.

In Queen, Rani's journey is in the opposite direction. When Vijay informs her of his decision unceremoniously in a coffee shop and later switches his phone off, it's as if her life has come to an end. But her wise grandmother tells her she might just be grateful for this break some day. As the story progresses and we get to know Vijay better, we're relieved that she escaped this alliance.

For starters, he's an unimaginative stalker who chases her all over Delhi before she agrees to go out with him, prompting her to remark, "10 filmon mein ye paintra istemaal ho chuka hai". Through their courtship he dictates what she can and can't do—don't dance, don't drive, don't take up a job, don't cry in public etc—and is consumed almost entirely by social appearances. How one wishes this man were a mere caricature!

If a girl like Rani has to find herself, she can only do so by physically moving out of this claustrophobic environment. Kind as her family is, their worldview isn't likely to be very different from Vijay's—why else would Chintu need to accompany her everywhere? A meeting with relatives in faraway Paris illustrates the false consolation and jibes she would face back home over a broken engagement.

It's significant that this heroine is played by a small-town girl whose awkward diction and functional English has been the butt of many jokes. Ranaut isn't a bratty Juhu-Bandra star kid born with a sense of entitlement faking a young woman's journey towards self-realisation. She has come from nowhere to fight for her place in a cut-throat world, echoing Rani's situation.

Hence this journey is so different from the boys going off on bachelor holiday in Zindagi Na Milegi Dobaraa (2011). Indian men, like Vijay in Queen, can travel wherever they want at will (provided they have the means). They don't need to take a trip to find themselves; the world of choices is already open to them. As Vijay tells Rani, his parents are 'cool' about his decision to ditch her. Imagine the situation being reversed and her trying to tell the folks she'd changed her mind the day before the wedding!

Once in Paris, Rani goes through her share of problems, including nearly getting mugged. But she fends off the attack instead of waiting for someone to rescue her. On the whole though, the director is kind to her, throwing friendly characters in her path and letting her soak in different experiences—be it getting drunk and dancing on tables, sharing a hostel room with three men or testing her entrepreneurial skills by putting up a chaat stall in Amsterdam. A pleasant change from the conventional pattern of cautioning/chastising girls against experimenting and constantly making them lean on flawed men.

She also finds a compassionate 'Vijay' (Lisa Haydon)—who, rather than judging her, shows her the possibility of living with dignity on her own terms. The two women shop, dance and laugh freely as Rani recounts 'non-veg' jokes. When they part, Vijay asks her to remain true to herself, unlike the namesake striving to mould her to his requirements.

In Amsterdam Rani meets Roxette/Rukhsar, a sex worker whose earnings pay for her sisters' education back home (presumably) in Pakistan, but who can't tell her family the truth about her profession. Meanwhile her best friend Sonal is envious of her newfound freedom and says, "Tum teen laundon ke saath Amsterdam ghoomo, hum yahan potty saaf karte hain!" Suggesting that unless women themselves take extraordinary measures like Rukhsar or Rani, their fate is sealed.

By the time she returns from her sojourn there's a subtle but distinct transformation and a newfound spring in her step. She announces her singlehood on Facebook and is seen reconnecting with all her new friends around the world to the tune of "Hungama ho gaya".