Instead of the regulation item song, the end credits of Soumik Sen's Gulaab Gang roll to inspiring stories of women who've overcome disadvantages of birth and of patriarchal oppression to find ways to fulfil themselves and help others. It's a welcome change. 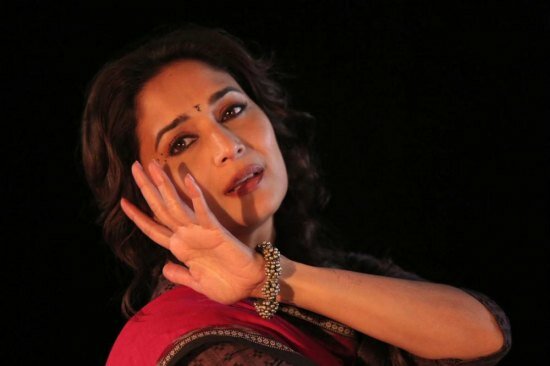 Sadly, the founder of the real Gulabi Gang, Sampat Pal doesn't figure on this list. Her defamation suit against the filmmakers also seems justified since they've obviously drawn on her persona without permission, credit or compensation. Still, she needn't worry about any being cast in an unflattering light in this heavily-Bollywoodised version. Rajjo (Madhuri Dixit) is a hero and worthy successor to Mrityudand's (1996) Ketki who rallies the womenfolk to take on a bunch of hypocritical men in a fictional Bihar village.

The only difference being that here the adversary isn't a man, but a woman who thinks and acts exactly in the vein of power-hungry politicians (which, one might add, is a gender non-specific domain). As Sumitra Devi, the ruthless and conniving leader, Juhi Chawla is unabashedly over-the-top. It serves the film well, because this is exactly what the trailer promised—a clash of two yesteryear icons in a battle of good versus evil. Something we watch male stars do in film after film, indulgently condoning their asinine antics.

Fortunately Rajjo isn't entirely filmy. She's a woman on a mission. And she advertises it on her forehead with the Devanagri letter 'R' drawn as a bindi. Denied a chance to go to school by her stepmother, she's taught herself to read and write. We don't know how she formed her Gang, but when we first see her as a grown woman, she's sitting under a tree imparting lessons to little girls. Education of the girl child is Rajjo's passion—we watch her eyes light up at the mere mention of a girl's school.

Later, when she seems closer to realising her dream, she visits a college in a nearby town to solicit donations from students. The students don't want to waste precious minutes of their lunch break listening to her lecture. But she silences them speaking of the abject poverty that forces mothers to plead for schools to be kept open through summer so that their kids can at least avail of a mid-day meal. It's also a scene for Dixit to flex her acting muscles, but in moments like these, and indeed in its emphasis on women's literacy and empowerment, Gulaab Gang rises above its Bollywood framework.

It also connects with Pal's true-life story as chronicled in Nishita Jain's gritty documentary Gulabi Gang in other ways. The first half of the documentary is taken up by the shocking case of a 15-year-old girl burnt to death by her in-laws for not bringing enough dowry. Here Tannishta Chatterjee plays a woman who's unceremoniously thrown out of the house by her husband and his mother over dowry. She's about to commit suicide when two gang members (Divya Jagdale and Priyanka Bose) spot her and take her to their commune. It's interesting to note that patriarchal attitudes are far more sharply etched in real life (as seen in Jain's film) than in fiction.

The woman still wants reconciliation with the husband, but when he continues to be abrasive, the Bose character breaks his arm. At the end of this scene there's a single shot of a little boy watching the incident from behind the gates of the house. It's Sen's way of using a mainstream film to drive a message. His maturity is also evident in the way he handles the rape scene (inevitable in films like these) where he captures the horror only on the soundtrack.

Similarly, when the women sing and dance with abandon the choreography offers no titillation. For instance in a 'holi' song—prime occasion for Bollywood to dress heroines in white and drench them for maximum impact—they throw gulaal at each other.

I point these things out because objectification and humiliation of women in Hindi cinema is such a routine matter, its absence actually merits acknowledgement. And yet, in an outrageous scene, the director has a man crawl between a woman's legs under orders from Sumitra Devi. Even to highlight her depravity, it's unpardonable.

Unlike in Rajkumar Santoshi's 'feminist' narratives like Damini (1993) and Lajja (2001), men have absolutely no role to play in these women's battles except as pawns. They don't need protection or endorsement from a recognisable male figure. The Crouching Tiger-style flying stunts, truth be told, are quite delightful, simply because they challenge the male bastion with Dixit bouncing off trucks and jumping over jeeps in her 'Durga' avatar beating up baddies.

Admittedly, Gulaab Gang is unabashedly mainstream. That it manages to let a few nuances slip through the cracks is a minor triumph.