"I will never forget my Indian roots and will always be a proud Bihari", said NRI Asha Khemka at a ceremony in Buckingham Palace where she was honoured with Damehood by His Royal Highness The Prince of Wales. She is the first Indian-born woman in 83 years to be awarded the DBE -- the female-equivalent of a Knighthood. 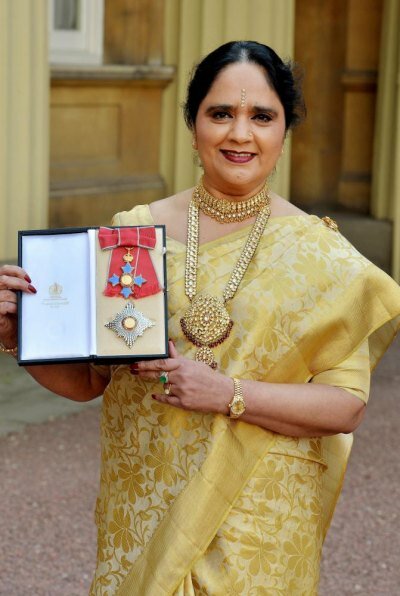 Indian-born Asha Khemke, who was awarded Damehood at Buckingham Palace, wore a traditional white and gold silk saree for the ceremony

For the ceremony, Dame Asha wore a traditional white and gold silk saree and teamed it up traditional Indian jewellery for the investiture ceremony held at Buckingham Palace where she received the award. Her honour was in recognition of her services to education. 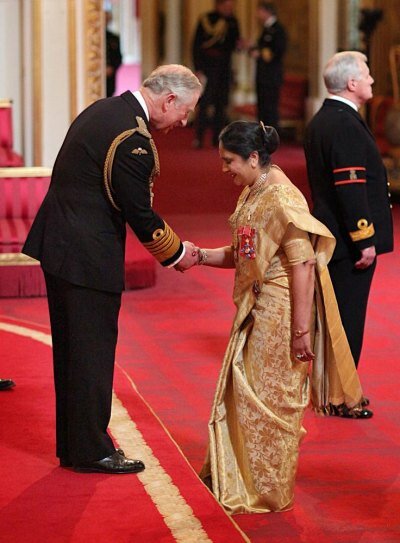 The NRI was named a DBE (Dame Commander of the Order of the British Empire) in the New Year Honours List in December 2013 but was presented with the honour only on Friday, March 14 at Buckingham Palace by Prince Charles at an investiture ceremony.

"This is without doubt one of the proudest moments of my life, along with my wedding day, the births of my three children and becoming a college principal," Dame Asha said at the ceremony. 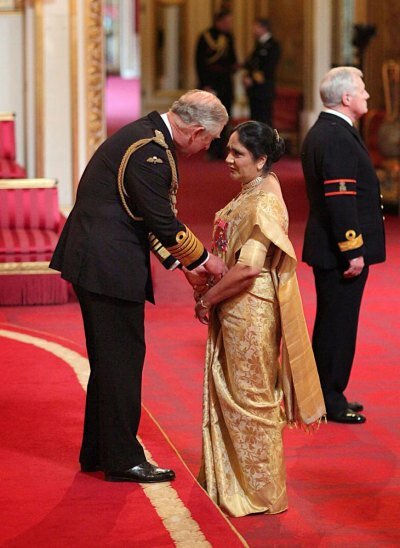 The rooted educationalist paid tribute to both India and Britain at the ceremony: "I am immensely grateful to Britain for recognising my strengths and enabling me to achieve my dreams. But I will never forget my Indian roots and will always be a proud Bihari, which has given me the entrepreneurial spirit, drive and determination to succeed."

NRI Khemka's journey is truly inspirational -- born and raised in Sitamarhi, a small town in Bihar, she was married at the age of 15. She then moved to the UK in 1978 with her husband Shankar Khemka and three young children --  daughter Shalini, and sons Sheel and Sneh. 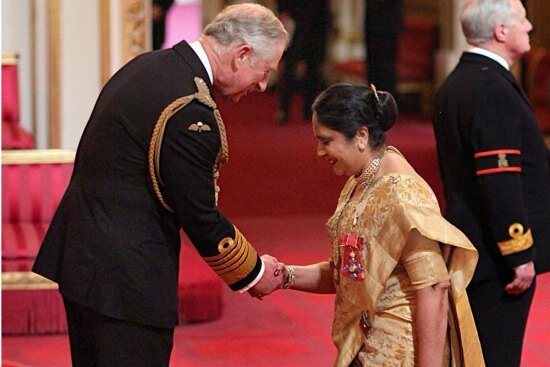 A full-time housewife for 20 years, Dame Asha had limited formal education and little understanding of the English language and British culture. But with dedication and determination, she built a progressive career in the UK from being a student to a principal and a chief executive of a College.

Today she is a leading figure in the world of education and skills. As its chief executive Dame Asha has been instrumental in making West Nottinghamshire College one of the eminent institutions in the UK. She is also the founding chair of the Association of Colleges (AoC) India – an organisation set up to progress links between educational institutions in the UK and the Indian subcontinent.

This is the second time, Dame Asha was honoured at Buckingham Palace. Five years ago, she was awarded the OBE (Order of the British Empire) by Her Majesty Queen Elizabeth II.

"Although it was my second visit to Buckingham Palace, this is such huge recognition that I feel I now have a new responsibility on my shoulders – a responsibility to use this title to make an even greater impact on the Further Education sector and to develop closer links between educational institutions in the UK and India.

"I have never set out to achieve titles and, as deeply humbling as this is, I will continue with exactly the same ambition and passion as I've always had," she added.