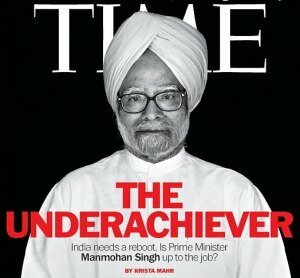 The Asian edition of the magazine features Singh on the cover under the title “The Underachiever – India needs a reboot”, according to reports.

The edition is due to release by mid-July.

The magazine has criticised that Singh, as a leader, is not able to control his ministers and the Finance Ministry which he recently took over. Singh took charge of the finance department after its former minister Pranab Mukherjee resigned ahead of his presidential race.

The magazine, in its cover story titled “A Man in Shadow”, also suggested that Singh is unwilling to stick his neck out on reforms that will boost the process of liberalisation. Incidentally, liberalisation is one of the major highlights of Singh’s political career.

Singh is the only Prime Minister since Jawaharlal Nehru to return to power after completing a full five-year term. In 1991, Singh, who was the Finance Minister, freed India from the Licence Raj and encouraged growth in the Indian market.

Under his leadership, Indian economy has grown at an 8–9% rate. In 2007, India achieved its highest GDP growth rate of 9% to become the second fastest growing major economy in the world.

However, in the quarter ended March 2012, India’s economic growth plunged to a nine-year low of 5.3%. The country’s GDP growth also fell to 6.5% in 2011-12 as against the 8.4% GDP growth in the previous year. The Indian currency - INR - has also been performing weakly against the dollar.

The prime minister and his government are failing to act when the country's economic growth was slowing down, the Time magazine added.

Its report noted that Singh can be perceived as an ineffectual bureaucrat presiding over a "deeply corrupt government". The newspaper's report comes amid the recent coal mining controversy and allegations of misappropriation, impropriety and corruption in coal block allocation involving government ministers.