One of India’s most inspiring entrepreneur, Ratan Tata, has become the first and the only Indian national to be honoured with the GBE, Knight Grand Cross of the Order of the British Empire, since India became a republic in 1950. 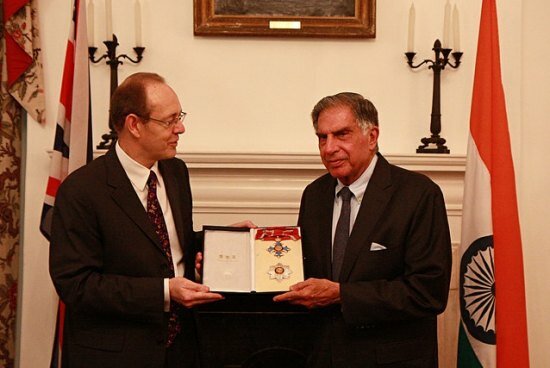 British High Commissioner to India, Sir James Bevan, conducted the honours presentation ceremony for Ratan Tata, Chairman Emeritus of Tata Sons on Monday, May 5, 2014.  The High Commissioner presented Tata with the GBE on behalf of Her Majesty Queen Elizabeth II.

GBE, one of the highest civilian honours conferred by the UK, was awarded to him in recognition of his services to UK/India relations, inward investment to the UK and philanthropy.

This is the Tata Group visionary’s second British Empire honour. Previously, in 2009, Her Majesty Queen Elizabeth II conferred on him the honorary award of Knight Commander of the Order of the British Empire (KBE).

Receiving the GBE, Ratan Tata said: "It has been a privilege to endeavour to have our enterprises contribute positively to the growth of the UK." He called Jaguar Land Rover "venerable English brands" and said he was proud of the team that restored the brands to their earlier glory. 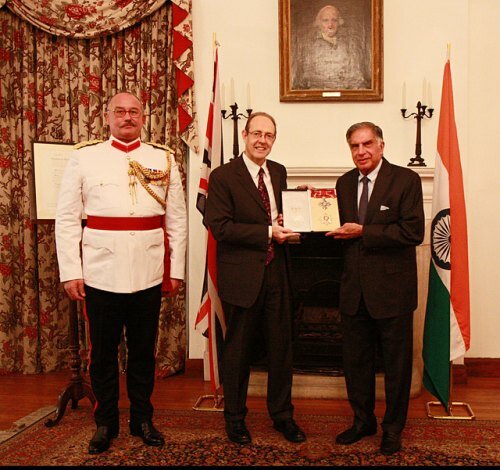 Speaking after the ceremony, Sir James said: “Ratan Tata’s leadership, vision and integrity will remain the gold standard for generations of aspirational British and Indian business people. His contribution to the deep ties that exist between the UK and India has been invaluable”.

Ratan Tata is a member of the UK-India CEO Forum and the British Prime Minister’s Business Advisory Group. As Chairman of Tata Sons, he oversaw the Tata Group, one of the leading foreign investors and employers in the UK. Under his leadership the UK benefited from significant inward investment from Tata companies. Tata are now the largest manufacturing employer in the UK.

The internationally-recognised, 77-year-old Indian businessman, who became the chairman of Tata Group in 1991, retired from his position after 50 years of service at the conglomerate in December 2012.

Since then, he shifted his focus on the conglomerate’s philanthropic activities and has been serving as honorary chairman emeritus.

Ratan Tata started his career in Tata Group in 1962 and assumed the role of the group’s chairman in 1991 after JRD Tata stepped down as Tata Industries chairman. Under his leadership, Tata Group expanded its global footprint with three significant UK acquisitions including Tetley tea, Corus - the steel manufacturing company and Jaguar Land Rover.

He has been instrumental in the company’s £15bn-plus investment in the UK manufacturing sector and for reviving the premium but ailing carmaker JLR.

He is the recipient of Padma Bhushan and Padma Vibhushan – the highest civilian award in India for his contribution as an Indian businessman.