19 Indians have been arrested following a UK-wide criminal investigation into a scam around Indian nationals working as ‘Ministers of Religion’ at a missionary society. The arrests have been made at Slough, Southall, Hounslow, Leicester, Luton and Southampton – areas with huge Indian population. 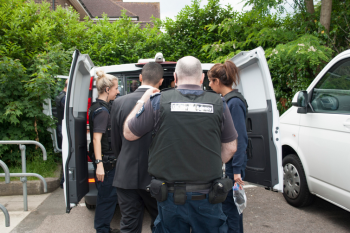 The UK border control and the National Crime Agency (NCA) is conducting an ongoing investigation into the Khalsa Missionary Society at Cheetham Hill Road in Manchester and how it is involved in sponsoring Indians nationals to work at the society as Ministers of Religion, under Tiers 2 and 5 of the points-based system for migrant workers.

They are now being questioned at police stations across the UK, and all the addresses visited are being searched, the UKBA has said.

These arrests bring the total number of people arrested in connection with the criminal investigation to 22.

“This is a complex operation linked to suspected immigration crime that targeted several locations across the UK,” said Nick Wood, from the Home Office criminal investigations team.

“Our investigation will continue with the evidence we have seized,” Wood warned.

Another nine Indian nationals were arrested, during this criminal raid, for other immigration offences such as overstaying their visas.

While steps are underway to remove these nine Indians from the UK, border control officers clarified that the nine arrests are unconnected to the criminal investigation.

Three separate cash seizures were also made by the officials and are now subject to investigation.