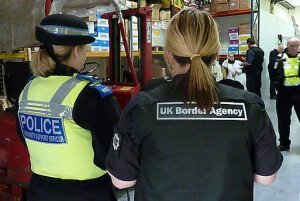 In a sustained crackdown on illegal immigration to Britain, the UK Border Agency has arrested eight men, including Indian nationals, for assisting illegal migrants to fraudulently obtain visas to work and live in the UK.

The UKBA officials ran an operation on Tuesday, October 16 which involved raids on nine separate addresses in north and north-west London following which it charged the eight men (between 30 and 35 years) from London areas such as Southall, Hayes, Brent, Harrow and Kilburn. The men allegedly conspired to defraud the Home Office, according to UKBA officials.

Three men -- Faisal Sultan (31), Sheeraz Sultan (32) and Shahzad Sultan (35) -- were from Brent. It is likely that the men are related to each other. Two men Hafiz Ullah (32) and Fida Hussain (32) were arrested at an address in North Road in Southall, an area with a huge Asian population.

Lastly, another Indian national Devashish Shah, a 32-year-old, was also charged with conspiring to defraud the Home Office. Shah was arrested at an address in St Pauls Avenue, Harrow.

All eight men had to appear before Hendon Magistrates following the arrest.

"The arrests, carried out by our West London criminal and financial investigation team, were the latest phase of a year-long investigation into what is believed to have been a conspiracy to assist migrants to fraudulently obtain visas," the UK border control agency has said.

Its West London criminal and financial investigation team is a unit of police officers dedicated to investigate organised immigration crime.