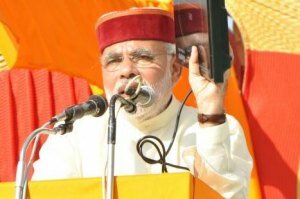 Earlier this year, Brent North MP Barry Gardiner extended an open invitation to Modi, who is BJP's prime ministerial candidate for the 2014 Lok Sabha elections. The anti-Modi protesters staged a protest outside Gardiner’s surgery in Wembley on Monday September 9th.

The protesters also included Brent Trades Council and they demanded that Gardiner withdraws his invitation and "never invites Modi to the UK".

“It is a terrible idea to invite Modi given his involvement in the massacres in Gujarat. Barry Gardiner should withdraw the invitation right away,” said Pete Firmin, Chair of Brent Trades Council.

Following the protest, Gardiner said that Modi is unable to come to the UK in the next few weeks in the face of so much of opposition to his invitation, the organisers of South Asian Solidarity Group said.

But the protesters want more. “Modi has already tried to make political capital in India from this invitation, and we need to send a clear message that he is not welcome here,” according to the South Asian Solidarity Group.

Narendra Modi, who has been Gujarat chief minister since 2001, is the leader of the Hindu nationalist party BJP (Bharatiya Janta Party).

The anti-Modi campaigners in the UK said that right-wing politician Modi was responsible for the horrific attacks on Muslims in Gujarat in 2002 in which more than 2,000 people died.

Among those killed in the riots were three Britons, Saeed and Shakeel Dawood and Mohammed Aswat whose family are still seeking justice.

According to a leaked report by the British High Commission in India, the violence “had all the hallmarks of ethnic cleansing and that reconciliation between Hindus and Muslims is impossible while the chief minister [Narendra Modi] remains in power”.

Modi is currently making a bid to become India’s next Prime Minister and has launched a campaign using openly fascistic and anti-minority rhetoric, the group's members said.

Gardiner, who chairs the ‘Labour Friends of India’ (LFI) invited Modi to the UK to speak at the House of Commons on the subject of ‘The Future of Modern India’.

The protesters have argued that Gardiner has acted without consulting other LFI group members.

Eight years ago, the UK denied Narendra Modi a visa over his alleged complicity in the 2002 Gujarat riots. The 63-year-old hardliner was last in the UK in 2003 when the BJP-led coalition NDA was in power. But at that time he was not on a state visit.

But in May this year during his India visit, Prime Minister David Cameron hinted that the UK may lift the ban on Modi’s visa and welcome him here. Last year, the UK also ended its boycott of Modi.

The latest open invitation to the controversial leader has triggered a strong anti-Modi campaign by UK’s Sikhs, Muslims and human rights campaigners.

Of the 1.5 million Indians in the UK, a little over half are Gujaratis.