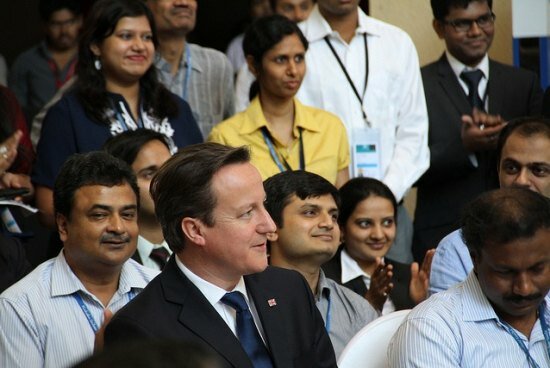 On his visit, Cameron said: “As India grows, it needs a partner that can support its ambition –in infrastructure, in energy, in healthcare and more. It wants its business to have access to European and global markets and its students to get the best education in the world and Britain can do all these things.”

The UK prime minister is scheduled to meet his Indian counterpart, the president, a number of Indian government ministers, and investors and businesses in both Mumbai and Delhi.

In its bid to build deeper ties with growing economies like India where represent opportunities as against the stagnant European markets, the UK government is  supporting and encouraging local companies to do business in India in the future.

“We are on track to double our trade with India by 2015. India has great potential to become one of the largest markets in the world,” said UK trade minister Lord Green.

Cameron’s largest ever delegation in an overseas trip have made progress in striking trade and investment deals in India, according to the British High Commission in the UK.

British retailer Debenhams is opening ten new stores across India by 2017. The Royal Mint and the MMTC-PAMP India have collaborated to strike The Royal Mint’s gold Sovereign commemorative coins in India for the first time in a century.

Among other new trade deals for the UK are:

Meanwhile, there were investment deals from India too.

The UK government is encouraging more innovative technology companies from India to set up in the UK, Cameron said.

It will also support the creation of a new pan-India network of British Business Centres by 2017.