The wait is over as Bollywood’s Who’s Who walk down the red carpet at the prestigious Cannes Film Festival yet another year. Aishwarya Rai Bachchan, Sonam Kapoor and Mallika Sherawat wow the audience with their glamourous appearances at Cannes 2016. Especially Aishwarya Rai Bachchan's bold purple lip colour choice on Day 3 made raised many eyebrows. 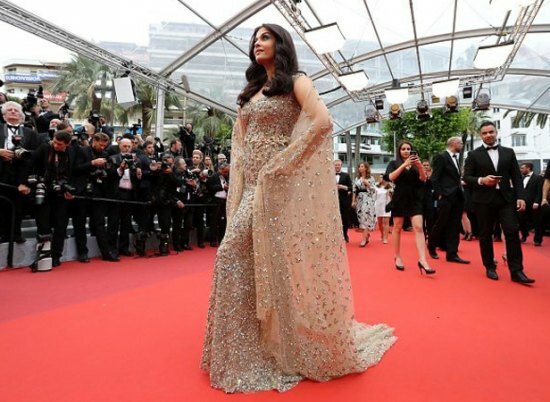 Cannes 2016 red carpet marks Aishwarya Rai Bachchan’s 15th appearance at the iconic film festival. The actress who has had fashion hits and misses at Cannes, stunned her fashion critics this year with her dazzling gold-coloured gowns. For her first ever Cannes 2016 appearance, Aishwarya Rai Bachchan wore a gold-coloured embellished Ali Younes gown. 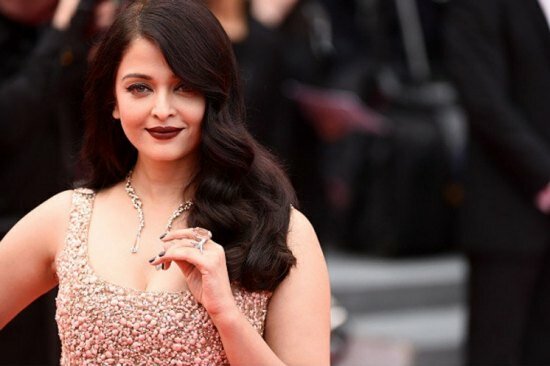 The actress and L’Oreal brand ambassador teamed the floor-length dramatic gown and the sheer gold shawl with quirky blue eye make-up and wavy hair while keeping rest of the make-up and accessories to a minimum. Aishwarya Rai Bachchan’s gold pick won a thumbs up from her fashion critics.

For her second red carpet appearance at Cannes 2016, Aishwarya Rai Bachchan continued her love for gold with another stunning floor-length gown by her favourite designer Elie Saab. This gown, although similar in colour looked distinctly different – it was cinched at the waist with a gold-coloured belt. This time, Ms Bachchan teamed it up with deep maroon lipstick and a glittery necklace. She wore it for Steven Spielberg’s red carpet premiere of The BFG. 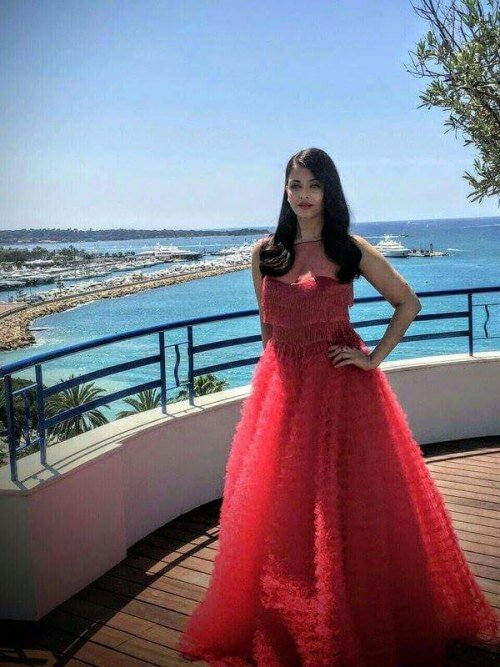 For the second day, the actress gave the gold a rest and instead picked a hot red Naeem Khan gown with a sheer red high neck pattern. The actress continued her minimal makeup and wavy hair look. 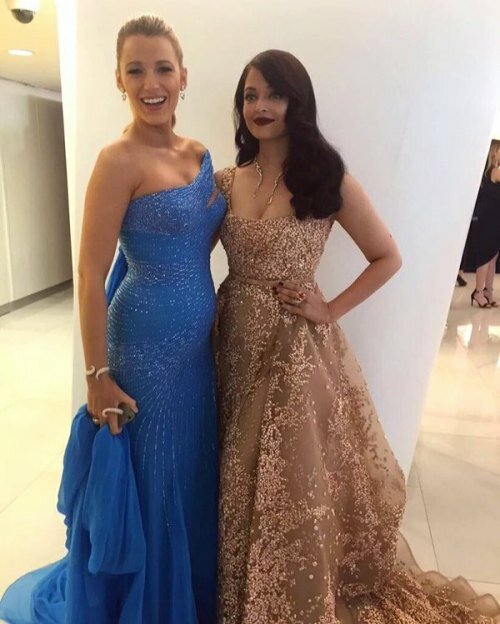 At Cannes 2016, Aishwarya Rai Bachchan also socialized with her Hollywood pals. Here’s the lady in gold posing for the shutterbugs with Hollywood’s Blake Lively. 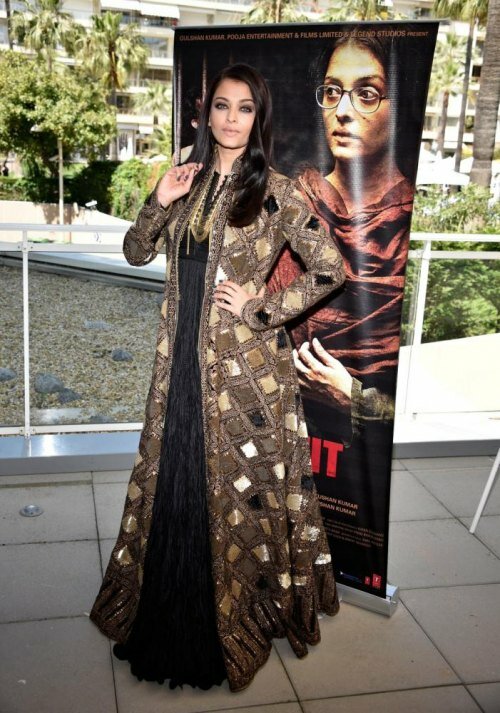 For her next appearance Ms Bachchan pulled all the stops and experimented boldly with her looks. 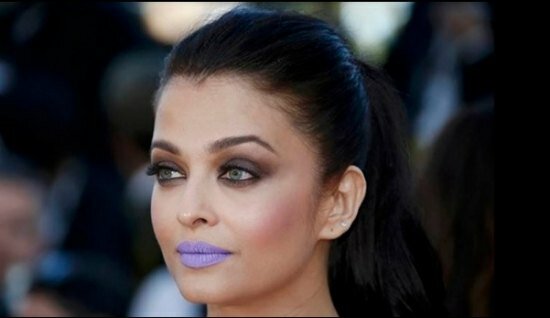 While she chose an off-shoulder ball gown, it was her lipstick colour choice that made heads turn. Aishwarya Rai Bachchan opted for a very bold purple/mauve shade of lip colour with kohl-eyed make-up. 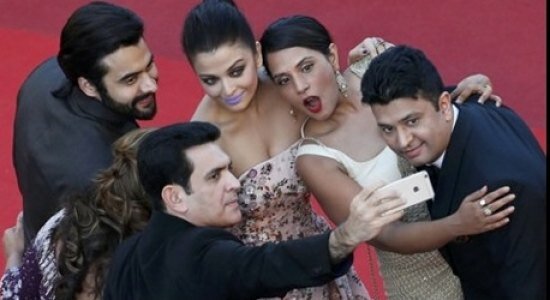 The lipstick colour had her fans and fashion critics divided but the actress continued to flash her smile while posing for shutterbugs with her Sarbjit cast.

But it was not just Aishwarya Rai Bachchan who made Bollywood proud at Cannes red carpet. 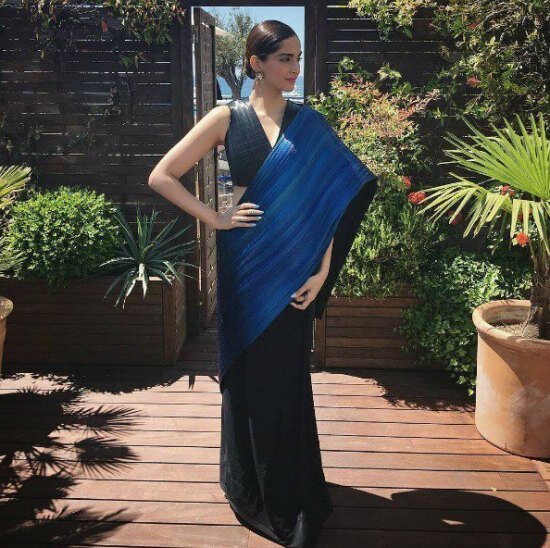 Sonam Kapoor, who is basking in the critical and commercial success of her film Neerja, also wowed at Cannes 2016. Already billed as the fashion diva of Bollywood, Sonam Kapoor wore a black and midnight blue saree-outfit with a modern twist fit for Cannes red carpet.

Styled by Rhea Kapoor, the actress looked stunning with her hair tied back and dramatic eye make-up. She beat the French Riviera sunshine with her minimalistic style of cool blue look, sun glasses and lots of smiles. Sonam Kapoor was also representing L’Oreal at Cannes 2016. 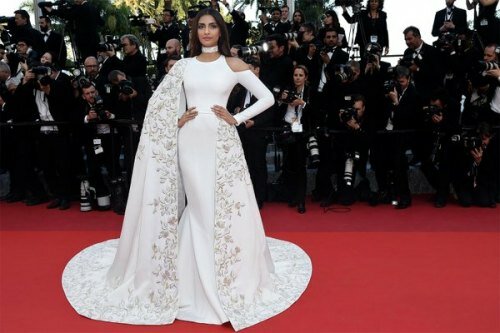 Sonam Kapoor in custom made Ralph & Russo for the screening of The Land and the Moon at Cannes red carpet.

For her second red carpet appearance, Sonam Kapoor looked like a real diva in a white custom-made Ralph & Russo gown with white choker necklace for the screening of 'The Land and the Moon' film. 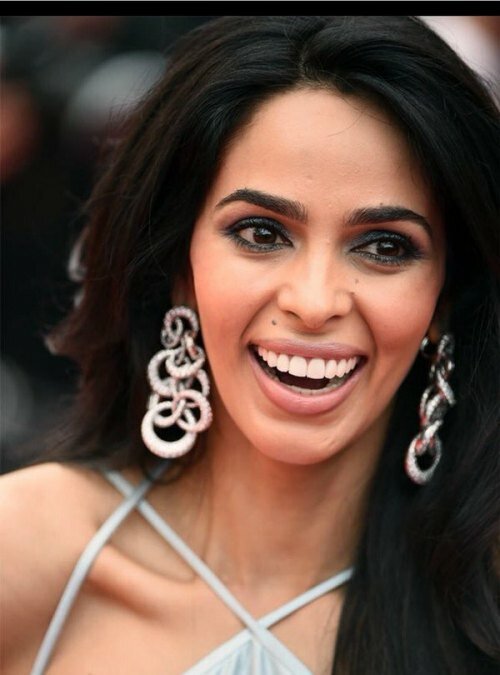 Last but not the least was Mallika Sherawat and her silver-coloured red carpet appearance. Ms Sherawat wore a silver-coloured Georges Hobeika floor-length gown and similar coloured accessories for her appearance on Day 4 of Cannes Film Festival 2016. 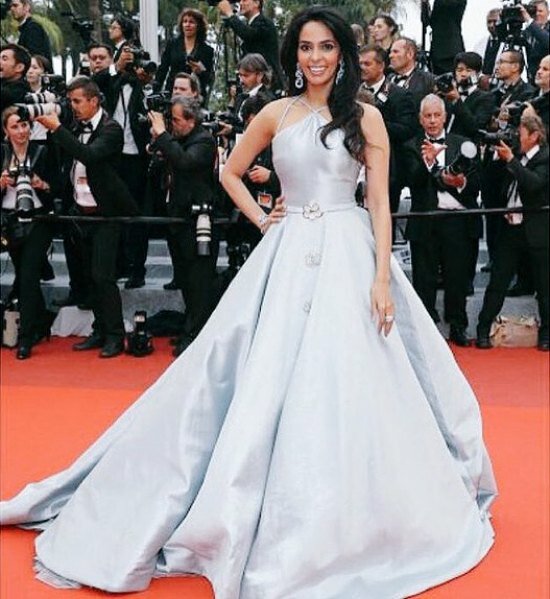 She also attended the Spielberg movie premiere and continued her trademark smile and flying kisses at the red carpet. The actress tweeted: “Having a great time on the red carpet.” 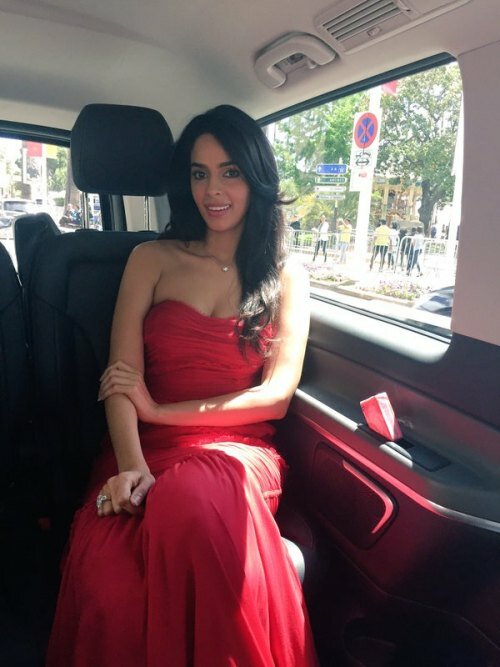 The actress also wore a red Dolce & Gabbana corset-style gown for the press conference of her international film Time Raiders.