India’s batting ace Ravindra Jadeja has been fined 50% of his match fee by ICC match referees over an altercation with England’s bowler James Anderson at the ongoing India-England Test match series. 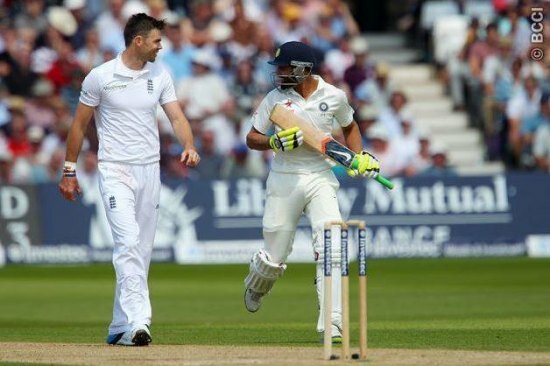 According to match commentators confrontation between the two players did occur.

The ICC found Jadeja guilty of  a Level 1 breach of the ICC Code for his involvement in an incident with Anderson during the second day of the first cricket Test at Trent Bridge on 10 July.

According to the referees, 25-year-old Jadeja was guilty of offence relating to “conduct contrary to the spirit of the game”.

Referee and former Australian batsman David Boon said: "While I was in no doubt that confrontation did occur, and that such conduct was not in the spirit of the game and should not have taken place, I was not comfortably satisfied that this was a level two offence."

"Having heard all the evidence, I was comfortably satisfied that Mr Jadeja had committed a level one offence."

But the Indian cricket board BCCI said it is “not satisfied with Jadeja verdict” and is planning to appeal against the sentence.

“The BCCI believes that Mr. Ravindra Jadeja was not at fault, and supports him fully,” the Indian board said.

Meanwhile, Anderson has been charged by India manager Sunil Dev under Level 3 breach of the ICC code which states: “Where the facts of the alleged incident are not clearly covered by classified offences, conduct that either: (a) is contrary to the spirit of the game; or (b) brings the game into disrepute”.

All Level 3 breaches carry a penalty of between four and eight suspension points. Two suspension points equates to a ban of one Test, or two ODIs, depending on which type of match is scheduled next for the suspended player.

In the current India England test series played in England, the first Test was drawn, and India won the second match at Lord's, after Jadeja ran Anderson out with a direct hit.

Anderson's case will be dealt with in a separate hearing scheduled for Friday, 1 August.