UK government has installed a statue of Mahatma Gandhi in the iconic Parliament Square in London by early 2015. The bronze memorial stands alongside those to other international leaders such as Nelson Mandela and Abraham Lincoln and is the 11th statue to be erected in Parliament square. 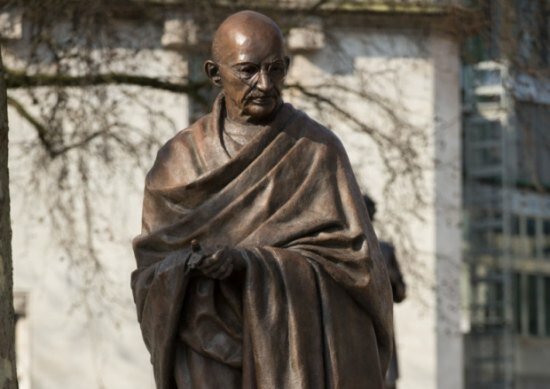 Unveiled by Bollywood veteran Amitabh Bachchan, the 9-foot statue was admired by UK Prime Minister David Cameron, India's Finance Minister Arun Jaitley, and Indian High Commissioner in Britain Ranjan Mathai during the ceremony. The statue is based on a picture of Gandhi on the steps of Downing Street in 1931.

The statue aims to provide a focal point for commemoration this summer of the 100th anniversary of Gandhi’s return to India from South Africa to start the struggle for self-rule, as well as the passing of 70 years since his death in 2018, and the 150th anniversary of his birth in 2019, Chancellor George Osborne and Foreign Minister William Hague have said.

The privately-funded statue was sculpted by Philip Jackson, the reputed British figurative sculptor, renowned for statues of the Queen Mother and Bomber Command.

It honours Mahatma’s inspiration for non-violent civil rights movements around the world.

“A monument in a location of symbolic value for our democracy is a fitting tribute to this great man, which will inspire us all to uphold his ideals and teachings ahead of important anniversaries of key moments in his extraordinary life,” Chancellor Osborne said. “Gandhi has a particular connection to London, having studied here like so many of the talented young Indians we welcome today.”

In 1888, Gandhi travelled to London, England, where he studied law and joined the Society of the Inner Temple in London to become a barrister.

Foreign Minister Hague announced the statue installation plans last summer while visiting Gandhi Smriti, the Gandhi Memorial in New Delhi on July 08. The memorial is located on Tees January Marg (30 January Road) at Gandhi's home and the site of his death on 30 January, 1948.

"Gandhi’s view of communal peace and resistance to division, his desire to drive India forward, and his commitment to non-violence left a legacy that is as relevant today as it was during his life,” Hague said at that time. “He remains a towering inspiration and a source of strength.  We will honour him with a statue alongside those of other great leaders in Parliament Square."

The monument will be funded by charitable donations and sponsors and is led by a special advisory group under UK’s Culture Secretary, Sajid Javid.

"Celebrating Mahatma Gandhi’s reverence and greatness, a man who fought equally for everyone, in the form of a statue in Parliament Square is a fitting tribute. No matter what your background, history, or religion this statue will allow people from around the world to look upon him and appreciate his endeavour and successes for humanity," said Javid.