Wednesday, October 2, 2013 marks the 144th Birth Anniversary of Mahatma Gandhi (Gandhi Jayanthi) and Indians in the UK are paying their tributes to Babu through artwork exhibitions, inspirational play on non-violence and with lectures on Gandhi’s legacy and ideologies. 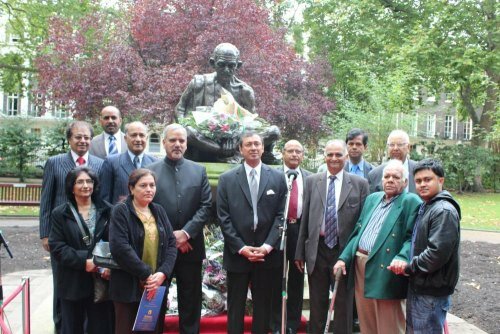 Like every year, the High Commission of India in London will observe Gandhi Jayanthi on October 2 at Tavistock Square, London WC1. The programme, beginning at 11am, will include paying tribute to Gandhi by placing bouquets at the Gandhi statue at Tavistock. It will be attended by Dr. Virander Paul, acting High Commissioner of India, Lord Mayor of Camden Councillor Heather Johnson and other dignitaries. The High Commission’s office will remain closed on Wednesday on account of Gandhi Jayanthi.

The Bharatiya Vidya Bhavan is holding an exhibition of artworks on the occasion of Gandhi Jayanti on October 1. Presented by charity organisation Wherever the Need, the free exhibition will feature artist Udayraj Gadnis’s paintings to celebrate Mahatma Gandhi. The exhibition programme will also include an inspirational talk by Professor Madan Pillutla on Gandhism and the art of negotiation.

Meanwhile, the Nehru Centre is hosting an evening playing the DVD of Jim Kenworth play “When Gandhi met Chaplin”.

Kenworth, a London-based playwright, wrote the play in 1931 about the unlikely meeting between two iconic figures of the twentieth century, Charlie Chaplin and Mahatma Gandhi.

The Nehru Centre’s Gandhi Janathy celebrations will include a playback of the play, performances of selected scenes and Q&A session with photographer and writer Prodeepta Das.

The Mahatma Gandhi Foundation UK will also pay its respects by holding an event in Harrow for UK Indians to celebrate Gandhi's legacy. The programme will include prayers, bhajans and tributes to Bapu. The organisation has extended the invitation to the High Commissioner of India, Mayors of Harrow and Brent, councilors, members of the House of Lords, members of the House of Commons and other dignitaries.

Indians in Edinburgh too will have an opportunity to pay their respects to Gandhi by attending the 2013 annual lecture on Gandhi Day organised by Edinburgh Interfaith Association.

The Wednesday evening event will feature a lecture by trustee of the Gandhi Foundation, George Paxton on the life of Gandhi, his influence outside India on other figures such as Martin Luther King, and the understanding of peace and non-violence post-Gandhi.

There will also be another lecture by Professor Dermot Killingley who will take a retrospective look at Gandhi’s influence on India, giving a brief outline of the Indian and European background to some of Gandhi’s key ideas and practices -- non-violence and satyagraha.