The five men who gang-raped a 22-year-old photojournalist on Thursday evening near Mumbai’s Lower Parel area have all been identified and arrested by the police. The woman, meanwhile, has been admitted to Jaslok Hospital after suffering from multiple injuries.

The gang-rape occurred at around 8pm on Thursday evening inside a dilapidated building near the abandoned Shakti Mills. The photojournalist, who was on a work assignment, was accompanied by a male friend.

The five men followed the two and started off passing lewd comments. But when the woman and her friend responded angrily, the five men beat the accompanying man and dragged the woman to the dilapidated building and raped her. 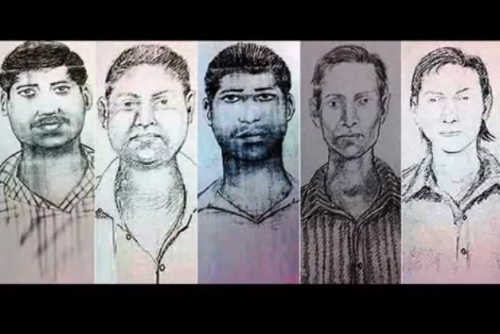 The Mumbai Police released sketches of the accused in the photojournalist’s gangrape case after the woman and her male companion described the men. Day after the incident, the police had held just one accused and identified all the others. The accused are said to be between 24 and 30 years of age and some of them are alleged drug addicts. By Monday, 26 August, all five accused have been arrested.

Maharashtra Home Minister R R Patil visited the victim at Jaslok hospital and said that the incident is a “very serious matter” and that arrests would be made soon.

Mumbai shell-shocked by the ghastly incident on a weekday evening

Bollywood veteran Anupam Kher said on Twitter: “Moral bankruptcy is worse than financial bankruptcy. And we are heading towards both. Shameful and Sad.”

He added angrily: “There is no fear of Law. Rape cases go on for years. Nobody is hanged for Rape. Politicians are interested in power, not welfare of the people.”

“Sad validation of the fact that no city in India is safe for women. It is after all the same prevention/enforcement mechanism in use all over,” said actor Gul Panag on Twitter.

“Never thought that gang rape and mumbai could be mentioned in the same sentence. Feel sad and angered. Mumbai was once a safe city,” said actor Kunal Kemmu.

Many other celebrities, political bigwigs, campaigners and ordinary men and women took to the social media to express their shock and outrage at the incident.

The latest incident is eerily similar to the December 2012 incident of the brutal gang-rape of a 23-year-old student (“Nirbhaya”) on a city bus in South Delhi. She too was accompanied by a male friend who was beaten. Nirbhaya succumbed to her injuries and died on December 28, 2012.

Nirbhaya’s attack and her death sparked protests across India with women seeking the authorities to introduce tougher laws for crimes against women.