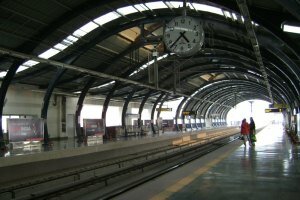 Dwarka metro station: The woman was travelling from Munirka to Dwarka in southwest Delhi when the gang attacked her
Image: Wikimedia Commons

The gang rape of a 23-year-old student on a city bus in South Delhi has outraged all political party members as well as the general public in India. The gruesome incident has once again proved how unsafe the capital city is for women.

MPs from all parties expressed their horror at the incident and discussed the shocking crime by putting aside regular parliamentary discussions. The MPs wanted strict action against the criminals.

Even in Rajya Sabha, the gang rape case was condemned with high profile party members such as Jaya Bachchan, Samajwadi Party MP breaking down in tears while Mayawati and Renuka Chowdhury demanded strict action.

Delhi chief minister Sheila Dikshit said that a fast track court could be set up to make sure the victim gets speedy justice.

The girl who is studying physiotherapy was travelling with her male friend on Sunday, December 16 in the capital from Munirka area to Dwarka when a gang of drunken men beat the two, stripped them, raped the woman and allegedly threw them off the private bus at around 9pm when the city was still bustling with activity.

The victim and her 27-yearl-old friend both suffered severe injuries and were admitted to a hospital where the woman underwent surgery. According to reports, the woman’s condition is critical as she has suffered genital injuries and her intestines had ruptured.

On Monday, the police arrested the private bus driver who, according to them, was part of the gang involved in the gang rape.

The incident has also caused widespread outrage on the streets of India with many women demanding safer environment for women in India.

Delhi is notoriously known for its rape figures which are far higher than other Indian cities of the same size. According to statistics, the Delhi police has registered 635 rape cases this year alone significantly more than the 572 cases registered last year.

Just weeks later in a freakishly similar incident, a woman was gang raped on a bus by seven men including the driver and his helper near Gurdaspur district in Punjab. According to reports, the police arrested six suspects on January 13, 2013 and are on the lookout for the seventh suspect.