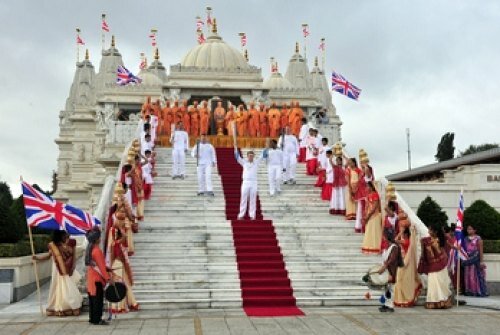 Neasden’s Shri Swaminarayan Mandir temple formed the backdrop for the Paralympics Torch flame as it arrived in London in the morning of August 29, heralding the beginning of London 2012 Paralympic Games.

Torchbearing team [seen in the picture] included Barrie Guy, Usman Aurakzai, Simon Schofield, Antony Eames and Rohit Ali. This team of torchbearers carried the flame to the temple at 6.30am on Wednesday, August 29 - the day of Paralympics Opening Ceremony.

They posed for photographs outside the Shri Swaminarayan Mandir temple, as they carried the Paralympic Flame on the Torch Relay leg through Brent.

London 2012 Paralympic Games will be declared open after the Paralympics Opening Ceremony on August 29. As the Paralympic Torch flame arrived in London after a 24-hour Torch relay.

Four national flames – representing the four countries that form the UK – were lit last week and were united in a cauldron at Stoke Mandeville, the village in Buckinghamshire. The London 2012 Summer Paralympics mascot, Mandeville, is named after the village due to its legacy with the Games.

Just before the London 2012 Olympic Games began in July, traditional Indian bells at Shri Swaminarayan Mandir joined Big Ben and church bells from across the UK for a national celebratory performance -- the vision of Turner Prize-winner Martin Creed as a form of ‘national sound sculpture’.

Shri Swaminarayan Mandir has featured in the official Olympic pin badge as the ‘London Landmark’ for the borough of Brent. The temple is hand-carved using 5,000 tonnes of marble and limestone.