Bollywood history was created when old-time superstars rivals Sridevi and Madhuri Dixit came together in the silver screen to bond and dance together. Sridevi was promoting her upcoming film English Vinglish in a dance reality show Jhalak Dikhla Ja which Madhuri was a judge. 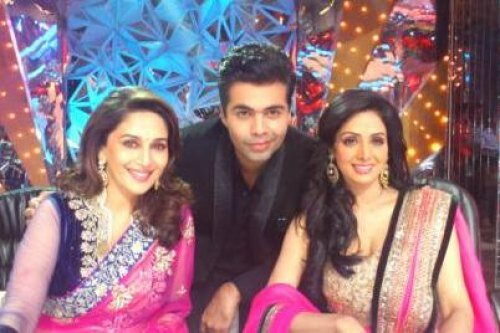 Also participating in the show as a guest was director Karan Johar who posted on Twitter a picture of the two Bollywood beauties. Johar was promoting his upcoming film Student of the Year at the Jhalak sets.

Madhuri Dixit (45) and Sridevi (49) were each other’s contemporaries vying for the same films and competing against each other for a larger fan base in the late 80s and 90s. While the two have never shared space in the big screen during their Bollywood rule, the two iconic actresses shared the limelight on the silver screen to treat their fans.

The two actresses were very cordial and had put their past rivalry aside to dance and pay tributes to one another’s hit songs. Sridevi grooved to Madhuri’s famous number Dhak Dhak Karne Laga… while Madhuri danced to Sridevi’s classic hit Mere Haathon Mein Nau Nau Chudiyaan…

Dance show Jhalak Dikhla Ja is the adapted version of the BBC’s popular Strictly Come Dancing show. It’s format is similar to the Strictly format and Madhuri joined as its judge in its season 4 in 2011 and continued her role in the current season 5.

Sridevi’s English Vinglish which premiered at Toronto International Film Festival in September is scheduled to release on October 5.