The Duke and Duchess of Cambridge – Prince William and Kate Middleton – are on their first visit together as a royal couple to India and Bhutan between 10th April and 16th April 2016. They have first arrived in Mumbai and stay at the Taj Mahal Hotel. They will visit New Delhi, Kaziranga, Thimphu (Bhutan) and Agra during their one week visit. 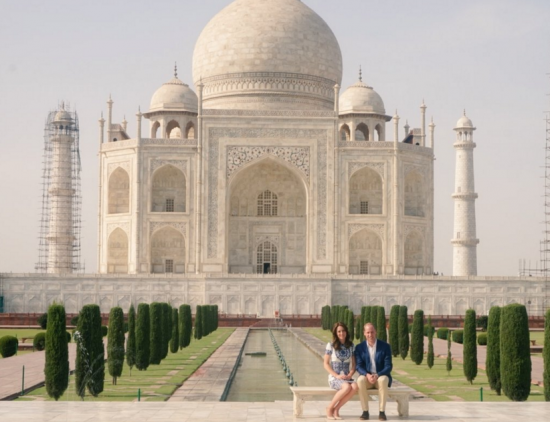 Prince William has said that he "feels lucky to visit a place where his mother’s memory is kept alive by so many who travel there".

Here are the pics from their visit: 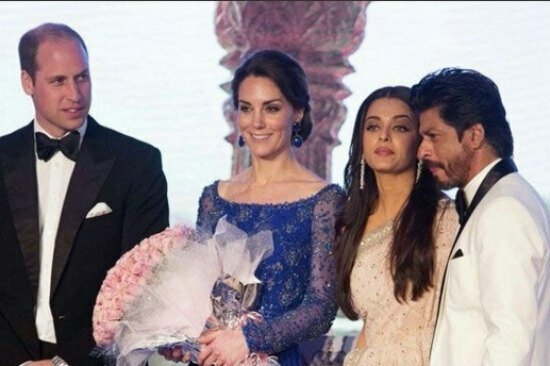 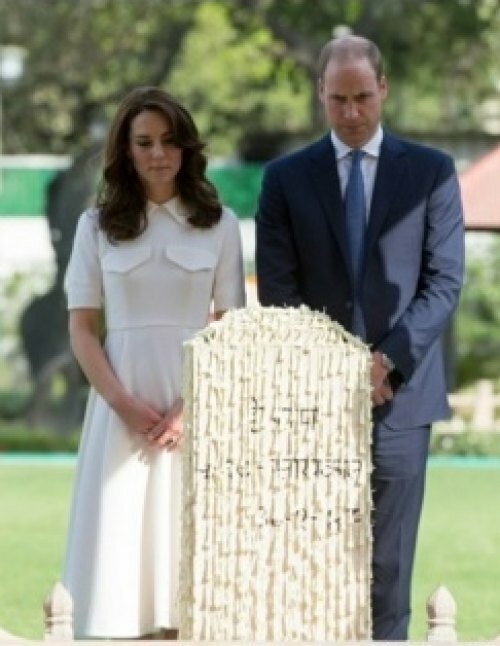 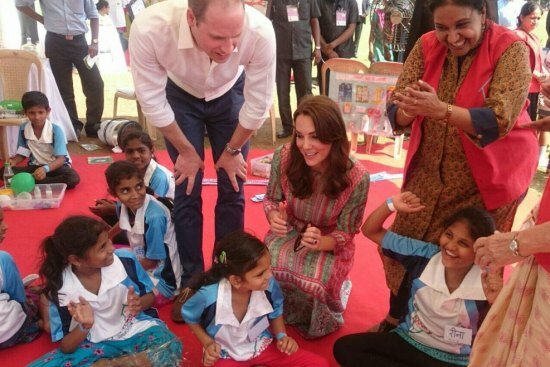 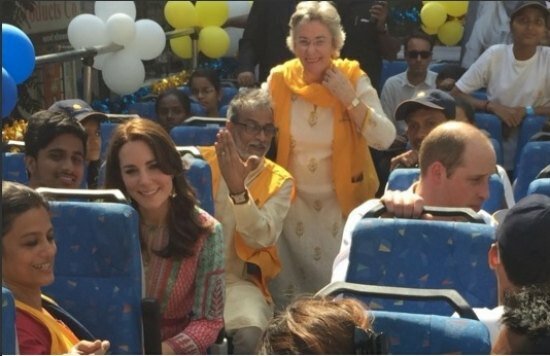 Duke and Duchess take an open top bus ride in Mumbai
Duchess, a keen sports enthusiast, tries her hand at cricket at the Oval Maidan 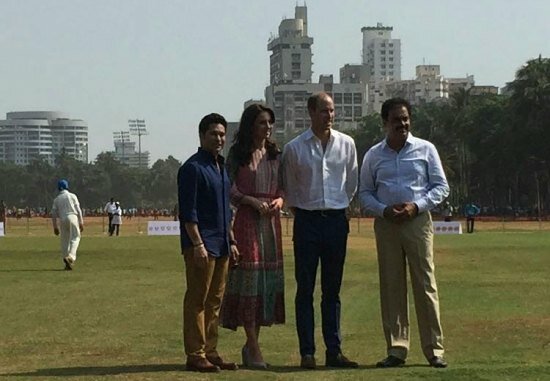 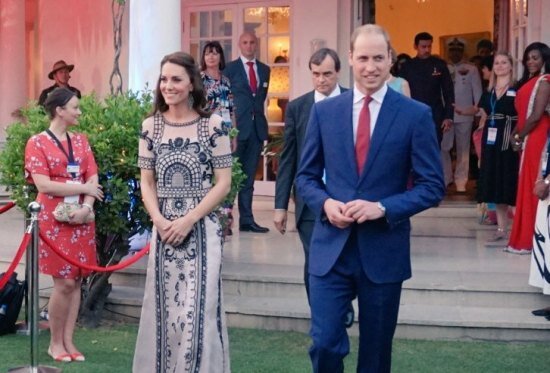 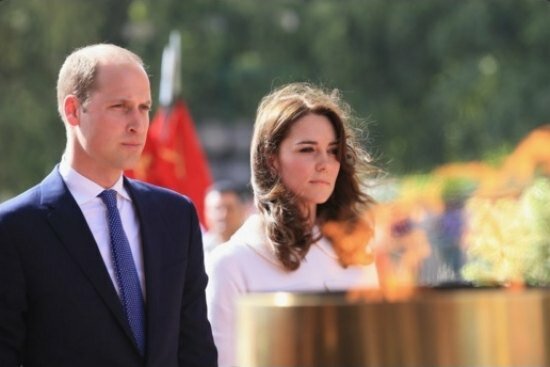 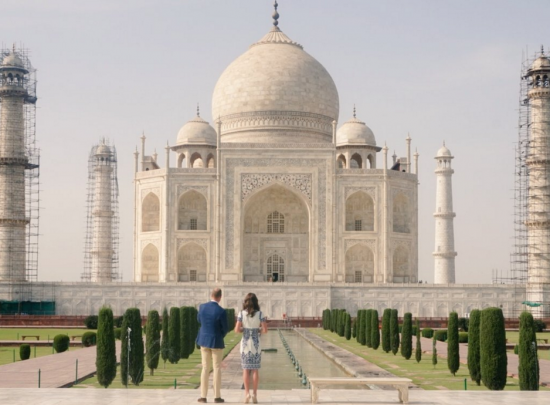 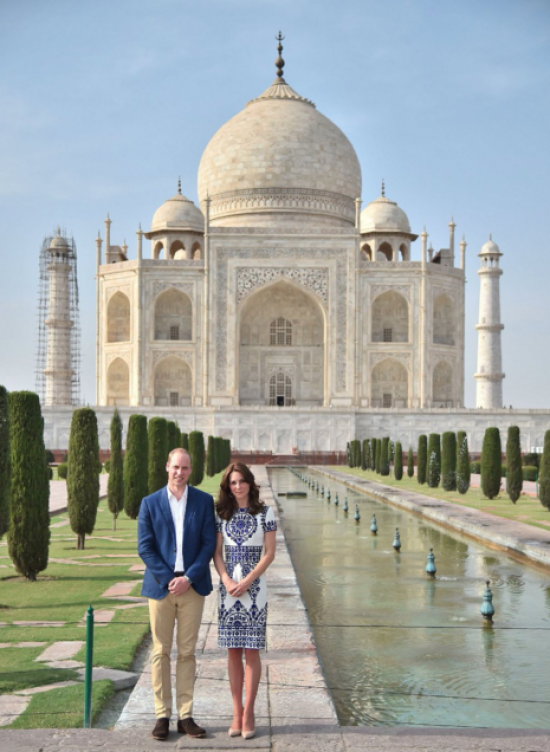 The Duke and Duchess have a packed itinerary during their India and Bhutan visit. Their trip is part of the Queen's 90th Birthday celebrations. The royal couple are travelling without their two children – Prince George and Princess Charlotte. They arrived in Mumbai on Sunday, April 10th and stayed at the heritage Taj Mahal Hotel in Mumbai.

April 10th Afternoon: Visit to the iconic Oval Maidan
Kate and William met children from Magic Bus, Childline and Doorstep – the three NGOs that have a long term commitment towards issues of child rights and addressing needs of vulnerable children through local partner networks across India. Kate has always been associated with many children's charities in the UK and children's welfare is a topic close to her heart.

They also play a friendly game of cricket with participants from a local Cricket academy and children from the 3 NGOs will be played.

Hosted by The British High Commissioner-designate and the British Asian Trust, the evening supported the three NGOs they visited: Childline, Magic Bus and Doorstep through a fundraising gala, as a legacy of the India tour. The event featured red carpet arrivals, pre-dinner reception and was a glittering Bollywood themed evening.

Yesterday, the Duke and Duchess laid a wreath at India Gate, to honour the soldiers from Indian regiments who served in World War I. They also met Indian cadets from the three services.

Later that afternoon, the Duke and Duchess toured the museum housed in the Old Birla House and paid their respects at the sacred place where Mahatma Gandhi's life ended on 30 January 1948.

The Duke and Duchess then attended a birthday party for Her Majesty The Queen at the residence of the British High Commissioner. The Duke used the occasion to personally pay tribute to his grandmother with a speech to the invited guests.

"As she turns 90, she is a remarkably energetic and dedicated guiding force for her family," Prince William said. "George & Charlotte will discover how lucky they are to have such a wonderful great-grandmother - a role model for the rest of their lives."

The couple will attend a ceremonial arrival reception before heading off to the national park next day.

The royal couple will travel to Assam to visit the iconic national park Kaziranga. The World Heritage Site hosts two-thirds of the world's great one-horn rhinoceroses. The park is also home to tigers, wild water buffalo, elephants, and swamp deer.

The Duke and Duchess will take a jeep Safari through Kaziranga National Park and meet Park Rangers and learn about the park's conservation challenges.

Prince William and the Duchess will see work on the elephant clinic and visitor centre and decorate 'Elephant Parade' statues. They will then meet villagers from The New Ram Terang Village, whose community was re-located with the help of the Elephant Family to take it out of the path of an elephant corridor.

From Kaziranga, the royal couple will travel to Bhutan.

April 15th: Travel from Bhutan back to India

April 15th: Duke and Duchess will travel to Agra, India to see the Taj Mahal

The UNESCO World Heritage Site, Taj Mahal is considered the ultimate symbol of love. The Ivory-white marble mausoleum on the banks of Yamuna river was built between 1632 and 1653 after it was commissioned by Mughal emperor Shah Jahan for his favourite wife, Mumtaz Mahal. The royal couple will see the mausoleum. The late Princess Diana has also visited Taj Mahal and an iconic photo of her sitting on the bench with Taj Mahal as the backdrop is symbolic of her visit to India.

The Duke and Duchess' India and Bhutan visit ends on April 16th in Agra and they prepare to arrive back in the UK.

"Their Royal Highnesses are very much looking forward to it," according to Kensington Palace officials about William and Kate's India visit.