Live mice in food boxes, cockroaches in takeaway meals and dishes rinsed in filthy water were some of the "truly disgusting" hygiene horrors found in Southall's food joints. The severe breaches of hygiene standards were exposed by Ealing Council's food inspectors.

Scroll down for video 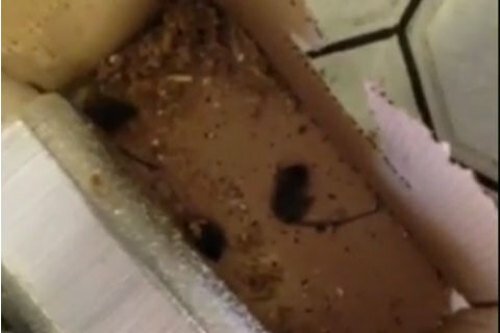 Group of mice in food boxes in a Southall eatery
Image: YouTube still

Delhi Wala, the vegetarian restaurant at King Street in Southall, was forced to close temporarily after live rats, mice and cockroaches were found on the premises. Officers were further shocked to find mouse and rat droppings and dead cockroaches in the kitchen and food storage areas.

In another instance, food inspectors found a group of mice running around inside a box used to store takeaway packs at Southall's 2 in 1 Pizza place at Lady Margaret Road. That's not all. Further inspection revealed German cockroach infestation and rodent faeces inside pizza boxes.

The council's investigation into food hygiene standards at these food businesses came after one customer complained of finding a cockroach in their food.

Similar rodent activity and severe lack of food hygiene was exposed at other Southall-based eateries including Palm Palace and Rays restaurant.

Separately, Ealing council officers unearthed mouse infestation at Acton-based butcher and grocer -- Al Rafidain. Some bags of rice and food packets on shop shelves were seen to be chewed on and gnawed at by rodents.

Some of the businesses were allowed to reopen since their closure in February after they met hygiene standards.

Here's the video of mice and cockroach-infested food joints in Southall: