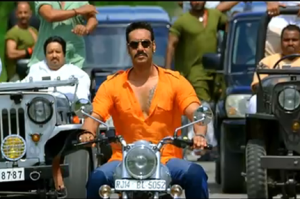 The film has also broken all the records in terms of the advance bookings, according to reports.The Bollywood romantic comedy film also stars Asin Thottumkal and Prachi Desai in lead roles.

Bol Bachchan is directed by Rohit Shetty -- the director of 2011's blockbuster film, Singham. The film's plot revolves around a man called Abbas Ali (Abhishek Bachchan) lying about his identity and then finding himself in tricky positions. Abbas has made people and his employer believe that he has a twin-brother.

What follows next is a series of cover-ups and lies because his employer Prithviraj Raghuvanshi (Ajay Devgn) cannot stand liars. Abbas's cover up means he has to act as two different people -- himself and his made-believe twin brother -- and have a fake name "Abhishek Bachchan". Asin Thottumkal plays the character Sania. Sania is Abbas's sister and the love interest of Prithviraj while Prachi Desai plays Ajay Devgn's sister Radhika and falls in love with Abbas in the film.

in the UK, Bol Bachchan was screened at Odeon cinemas.

In eight weeks since its opening, Bol Bachchan has collected 99.83-crore rupees at the Indian Box office and has collected more than 150-crore rupees worldwide becoming one of the blockbuster films of 2012. This is Ajay Devgn's second blockbuster after Singham and Asin's third Bollywood super-hit film after Ready and Housefull 2.

Bol Bachchan marks an important milestone in actor Abhishek Bachchan's Bollywood career as the film's success provides him with a much-needed departure from a series of Box Office flops between 2010 and early 2012. Abhishek Bachchan will next be seen in the sequel of Dhoom - Dhoom 3: Back in Action and Dostana in 2013.