Bollywood actress Asin Thottumkal, who was born in Palakkad, Kerala has celebrated Malayalam festival Onam in traditional style despite being in Mumbai.

Asin, who is still riding on the success of her latest “blockbuster hit” film Bol Bachchan, celebrated Onam on August 29 with family and close friends in Mumbai city. Asin enjoyed a traditional festival meal “Onam sadhya” and also made a pookolam (flower decoration) for the occasion, it is reported.

The actress was born in Kerala and celebrates Onam every year
Image: YouTube stills

Asin is currently busy filming for her upcoming Bollywood film Khiladi 786, where she will be paired with actor Akshay Kumar, her Housefull 2 co-star. The movie is set for a December release. 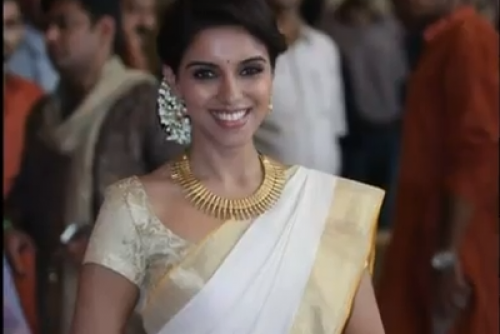 Her last Tamil movie Kaavalan, where she acted alongside Tamil superstar Vijay, was also a blockbuster hit.

Despite a busy schedule in Bollywood, the actress took time out to celebrate Kerala’s state festival Onam in true Malayali style.