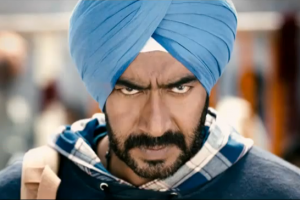 Ajay Devgn in Son of Sardaar
Still from YouTube (Viacom18Movies)

Bollywood romantic drama Son of Sardaar is slated for a Diwali 2012 release.

The first theatrical trailer of the film was released on social media channel YouTube on Thursday, July 19, 2012. The trailer features comic as well as action-packed sequences and shows all the lead characters but just Devgn’s dialogues about Sardaars.

Son of Sardaar is Devgn’s second film this year. His Bollywood comedy Bol Bachchan released worldwide on July 6, 2012. Although the movie received mixed reviews, it broke all the records in terms of the advance bookings and has collected more than 100-crores at the Box Office.

Son of Sardaar or SOS is directed by Ashwni Dhir and will be released on Novermber 13 to coincide with Diwali festival. Its official YouTube trailer has garnered more than 700,000 views in the first weekend.