Amitabh Bachchan on the film sets of Satyagraha –Democracy under Fire 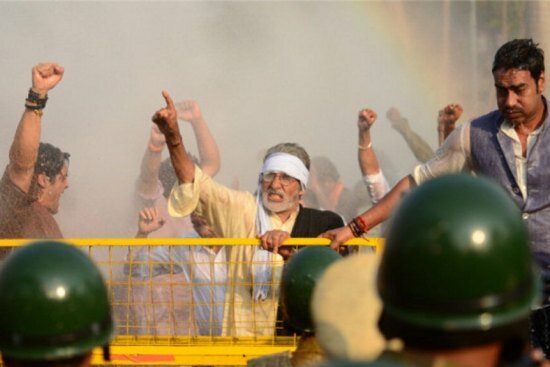 Senior Bachchan shared several photos from his shoot with his fans on Twitter.

Satyagraha –Democracy under Fire is a political thriller directed by Prakash Jha and will be released in August to coincide with India's Independence Day.

The film will be mostly shot in Bhopal and capital city Delhi. Satyagraha reportedly features Amitabh Bachchan as social activist Anna Hazare and Kareena Kapoor as a television journalist.

The filming began in February with Amitabh Bachchan travelling to Bhopal with his family including Aishwarya Rai Bachchan and Abhishek Bachchan after a visit to Siddhivinayak temple in Mumbai. Bachchan said that genuine water canons were used on the sets of Satyagraha.

In addition to Satyagraha –Democracy under Fire, Amitabh Bachchan’s two other films are scheduled for a 2013  release. It includes Bombay Talkies and the actor’s first Hollywood film The Great Gatsby where he plays the role of Meyer Wolfsheim.