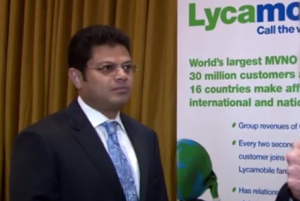 With international outgoing calls charged at one-rupee per minute and zero-charge for incoming calls, the Lyca pre-paid international SIM will save Indian travellers as much as 70% to 90% of their current international calling expenses when abroad, according to the company chief executive, Milind Kangle.

The launch of the post-paid roaming SIM card service is in response to the growing demand from Indian entrepreneurs, corporates, students, and foreign travellers for cost-effective yet reliable calling cards, Kangle added.

The SIM card is priced at Rs 250 and comes with a prepaid calling value of £1 and can be topped up from over one million Lycamobile outlets at 17 different countries.

Users will also be able to select a UK mobile number to use as a primary number in India while purchasing the SIM card.

The Lyca calling card – valid for a lifetime -- is free of rent or deposits and works in foreign countries such as Spain, France, Germany, the Netherlands, Switzerland, Poland, Denmark, Norway, Sweden, Ireland, Belgium, the US and Australia in addition to the UK.

The launch of the post-paid one-rupee roaming calling service from Lyca comes at a time when the UK company is planning aggressive expansion to its distribution network across Asia, Middle East, Africa. It also plans to extend its Indian services and raise its turnover from 5-crore rupees currently to about 60-crore rupees in 2014 as a result of its roaming SIM service, according to the company’s chief operating officer, Premanathan Sivasamy.