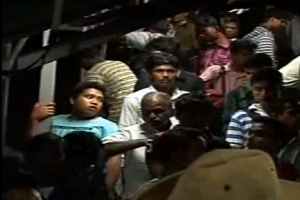 Despite reassurances from Indian Home Secretary RK Singh, as many as four thousand people from Assam, India’s north-eastern state, have fled from the southern city of Bangalore amid fears that they will be targeted in ethnic and religious attacks.

People from Assam in south Indian cities including Hyderabad, Bangalore and Kerala cities are coming back to Guwahati frantically after news about Hindu Muslim religious violence threats spread via text messages and social media.

According to the police there are rumours in south Indian cities that the north eastern Indians will be attacked after the end of the holy month of Ramadan on August 20.

Indian Home Secretary RK Singh blamed the "rumour mongering" via the internet for the tension and mass exodus.

He reassured the people of Assam and other north eastern states that there was no threat to any Indian living anywhere in the country.

The chief minister of Assam, Tarun Gogoi, too is also coordinating with the central government and other state governments to ensure the safety of people from Assam.

Despite government’s active efforts to make the people feel safe, thousands continue to flee out of the southern regions out of insecurity.

It is estimated that estimate out of a total population of nine million in Bangalore city, 3% is from the north-eastern states.