In a bid to revive India from its worst economic growth in a decade and a record trade deficit, the UPA government has announced a raft of FDI reforms such as allowing 100% FDI in telecom sector and raising limits in insurance, oil and gas and single brand retail segments.

Allowing 100% FDI (foreign direct investment) in the telecom sector would mean that global players such as Vodafone and Telenor can operate in India without having a local partner. Vodafone already operates in India but foreign investors until now were allowed to hold less than 75% stake in the sector. 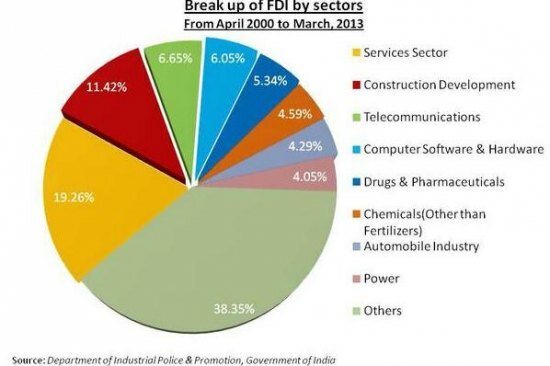 The government raised the FDI limits in insurance sector from 26% to 49%. While the FDI cap in defence sector remains 26%, the government stated that higher foreign investment will be allowed on a case-by-case basis if it is aimed at helping India benefit from the “state-of-the-art” technology.

Under the latest FDI reforms in the oil and gas and single brand retail sectors, the foreign investors need not wait for a clearance from the Foreign Investment Proposal Board (FIPB) for up to an investment of 49%.

This is the UPA government’s most significant FDI relaxation decision after last year’s decision to approve 51% FDI in multi-brand retail and 49% in the aviation sector. UPA ally Trinamool Congress protested at the relaxation of FDI at that time and its party chief Mamata Banerjee withdrew her party’s support to the coalition government.

While cap on multi-brand retail remains at 51%, India’s economic think tank are proposing to raise it to 74%.

The raft of reforms comes at a time when the rupee hit an all-time low of 61.21 against the dollar earlier in July and has lost 10% to the dollar since May.

To revive the falling currency, the RBI, earlier this week, raised the short-term borrowing costs to restrict the funds available to banks and said it plans to sell 120bn rupees (£1.48bn) in bonds, to drain cash from the market.

"FDI has a critical role in bringing in modern technology," Singh had said earlier in April while addressing India Inc. at CII (Confederation of Indian Industry).

The Posco investment was for about $5.3bn (£3.5bn) but the international firm blamed the local government’s inability to swiftly solve the land acquisition deal in Karnataka’s Gadag area.

But Posco is likely to proceed with its bigger $12bn plant planned in Orissa despite facing similar land acquisition problems.