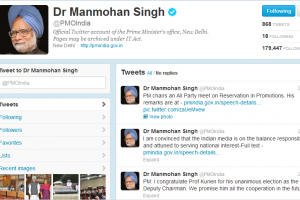 Micro-blogging site Twitter has blocked six accounts posing to be representative of the Indian Prime Minister’s Office after a government warning.

“Twitter has now conveyed to us that action has been taken stating ‘we have removed the reported profiles from circulation due to violation of our Terms of Service regarding impersonation’,” according to the PMO.

But, when it did not hear back from the Twitter officials for a long time, the Indian government Cyber Security Cell was requested to initiate action.

The request to block fake PMO accounts on Twitter came after rumours of ethnic and religious violence -- against migrants from North East living in southern cities such as Bangalore – spread via social media and text messages.

According to the government, a number of feeds on social media sites were responsible for the panic behind the exodus of Assamese migrants working in Southern cities such as Bangalore, Chennai, Mumbai and Pune.

The PMO asked social networking sites such as Twitter and Facebook to block several pages and accounts.

But when it did not hear back from the micro-blogging site, it threatened to ban the site in India.

But the Indian government has denied that it is planning internet censorship in the country amid criticism against the government’s stern warning to Twitter.

Twitter is said to have about 16 million subscribers in India.

The official PMO Twitter account is called @PMOIndia featuring the picture of Prime Minister Dr. Manmohan Singh and has a Twitter verification blue check on it.