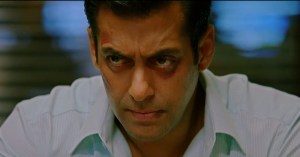 Salman Khan aka Bollywood jungle’s Tiger has shown his majestic might once again. After delivering hits such as Dabangg, Ready and Bodyguard, he is set to break Box Office collection records with his latest film Ek Tha Tiger. But is the film worth watching?

Khan knows his audience will watch him do just about anything -- so long as he cracks wry jokes, takes his shirt off (this time it's only a token nod to the custom) and beats up baddies in various innovative ways.

Watch the trailer of Ek Tha Tiger and more pictures from the movie here.

As a bonus, he has now-on-now-off girlfriend Katrina Kaif for company. She wisely suggests, "Ab tumhari umr shaadi ki ho gayi hai," -- a crumb thrown at loyal fans who must surely indulge in wishful thinking about this match made in heaven. Obviously neither India's RAW nor Pakistan's ISI care about whether Salman and Katrina finally get together within or without the film. They are more concerned about all the national secrets that may be traded in the process and the damage it may cause Indo-Pak dushmani.

On this flimsy premise (story credited to Aditya Chopra, as always), Khan concocts a muddle of high-voltage action sequences -- some of them breathtakingly shot, even if you can actually see Salman's body double now and then; interspersed with excruciating romantic moments, notably one involving meteor showers and the protagonists' dead fathers sitting next to each other as stars in the sky. Can we leave the mush to Karan Johar please? One nearly expected Shah Rukh Khan and Kajol to come charging out from behind the trees to demonstrate how to do these things without seeming downright foolish. 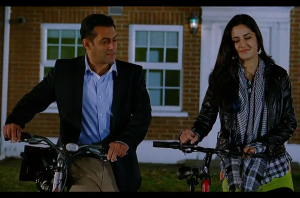 Meanwhile there are nagging memories of another cold turkey (oh, by the way, part of Ek Tha Tiger was shot in Turkey) called The Tourist, featuring Johnny Depp and Angelina Jolie and no story. It was a headless chicken from start to finish, despite the presence of Steven Berkoff. Here, they've brought in Girish Karnad as Tiger's boss and Roshan Seth in a miniscule role as a professor Tiger is despatched to spy on (the flimsy premise for encounter with Zoya) to elevate the proceedings to some semblance of seriousness. But really, what mission, which secrets?

Ultimately you get a whirlwind tour of Istanbul-Dublin-Havana, an absurd plot hinging on the idea of Indo-Pak hostility and the Salman-Katrina chemistry, and three longish action sequences that combine elements from several Hollywood spy movie franchises. Worth the price of a ticket? Yes, if you are a Salman fan.

Deepa Deosthalee is a film critic and a regular contributor to Cinemascope column. The views and opinions expressed in this article are those of the author and does not reflect the views or position of IndiaNewsBulletin.com. More of Deepa's works can be found on her site Film Impressions.

Bollywood movie Cocktail: Character analysis of Veronica
Review - Gangs of Wasseypur.
Why Rajesh Khanna will live in your hearts forever