Home » Column » Cinemascope » Review: Gangs of Wasseypur – why it is India’s The Godfather

Review: Gangs of Wasseypur – why it is India’s The Godfather 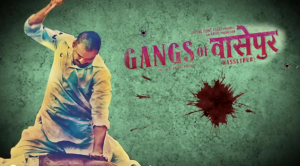 Gangs of Wasseypur is far removed from the gloss and sheen of big cities and equally, the make-believe of Hindi cinema. And yet it doffs a hat to the movies, particularly the 'angry young man' of the '70s who has as much an impact on some of the characters and the milieu they inhabit as it must have had on director Anurag Kashyap himself.

There is a scene from Trishul later in the film where a young man is fascinated with Amitabh Bachchan's nonchalance as he ignites dynamite at a quarry and walks towards the camera stylishly even as part of a hill explodes behind him. His bravado is echoed in this tale of relentless violence which carries on for generations -- it's either a thirst for revenge, a battle for survival, or, simply, a way of life.

It is fitting that casting director Mukesh Chhabra's is the first name on the opening credits of Gangs Of Wasseypur. For, Kashyap's most ambitious film thus far is first, and above all, a triumph of great casting. The import of an epic gangland saga set in a specific geographical region and spanning several decades to ultimately clock over five hours (being released in two parts) would be lost without each of the dozen-odd principal players shining through as distinctive figures in the larger drama of small-town mafia and their machinations.

The pre-credit prologue has a band of armed gunmen stealthily closing in on a house, followed by an explosion of guns and bombs that lasts for several minutes. The leader of the gang, Sultan (Pankaj Tripathi), keeps shouting out for a certain Faisal who is supposedly hiding inside. When we finally see the inhabitants of the house huddled together in one corner, they comprise three women, one old man and a youth whose phone rings to the tune of "Nayak nahin, khalnayak hoon main". He doesn't pick it up. The gunmen exit and find themselves confronted by a police post. The credits roll and we will have to wait for the second part to make sense of this scene.

The first half hour of this part establishes the central crisis -- the struggle to helm the coal mafia of Dhanbad/Wasseypur from the pre-independence days starting with Shahid Khan (Jaideep Ahlawat, superb), a brigand who steals food grains from trains in the name of a dreaded dacoit and later starts working for the local thekedar Ramadhir Singh (Tigmanshu Dhulia in a sparkling debut). When the British leave, the ownership of the mines passes on to the hands of Indian warlords like Singh who exploit the workers even more ruthlessly than the imperial masters. This long voiceover mapping the history of the region may appear boring to some, but for me, it's fascinating to watch the genesis of a socio-political conflict.

Shahid dies and his young son Sardar (Manoj Bajpayee), convinced that he was bumped off, swears to avenge his death. Shahid was a brave-heart, his son is ruthless yet charming in his own dysfunctional way, and a compulsive womaniser -- a fact his firebrand wife Najma (Richa Chadda) recognises and gives him hell for. The scene where she catches him red-handed at a brothel and beats him up is hilarious.

Sardar is well and away on his mission to decimate Singh and gradually starts breaking into his stronghold. While both characters are vicious, neither is given more importance or weight than the script demands. The lines between good and evil are too blurred for anyone to become larger-than-life. Though Singh does exude a quiet menace as a don-turned-politician who thrashes his own son publicly and is too wily to be readily upstaged.

As the film progresses, the screenplay picks up pace with Sardar flitting between building his parallel empire and impregnating his women -- he falls in love with a girl called Durga (Reemma Sen) while in hiding and marries her, abandoning his wife and sons for a few years. Neither woman plays victim -- Najma packs her young boys off to earn a living, but doesn't allow them to sully their father's name by sleeping with the enemy; Durga gets her own back for being abandoned, after she refuses to share a home with her  rival.

The sons grow up with angst and admiration in equal measure as the latter part shifts focus to their initiation into the family business. The younger son Faisal (Nawazuddin Siddiqui) is clearly the Michael Corleone figure who will emerge protagonist in Part 2. Siddiqui has such an arresting screen presence, it's hard to take your eyes off him -- think the Bachchan persona minus the height or the voice and his performance assumes even greater value.

Gangs of Wasseypur doesn't work as an original story -- in fact, it's Kashyap's most mainstream film -- but as a sophisticated retelling of a familiar tale in an authentic setting, complete with dialogue, styling and music that evokes the earthiness and raunchiness of the Indian hinterland. Imagine a song with lyrics like "Teri keh ke loonga" composed to peppy folk rhythms and used when Sardar first sets off on his mission in a jeep along dusty roads or "I am a hunter", a grossly offensive lyric sung by a band of hippies on a train providing the backdrop for a cat-and-mouse game involving a cache of guns, an informer and the police.

Sneha Khanwalkar's music is simply sensational and together with Kashyap she turns a film about bloodletting and vengeance into a rousing musical. And one that, despite its 160-minute running time, leaves you begging for more.