Bollywood movie Cocktail: Why Veronica is a doomed waif

There’s a scene in the latter half of Homi Adajania’s film Cocktail where Veronica (Deepika Padukone) gets drunk at a nightclub.

She has just been informed by her live-in boyfriend Gautam (Saif Ali Khan) that he now loves her flatmate and best friend Meera (Diana Penty) instead. Veronica falls all over Gautam begging him to take her back, trying to assure him that she’ll transform into the demure Indian wife his mother (Dimple Kapadia) approves of.

This disturbing moment, while it unfolds in a dimly lit London club to the sound of thumping music and gyrating bodies with trendily dressed protagonists, strangely resonates of Chhoti Bahu’s pathetic plea to her philandering husband to give up his dancing ladies and spend time with her instead in Sahib Bibi Aur Ghulam. She is willing to transform into the kind of woman he desires, and even take to drinking in the ultra-conservative environs of late eighteenth-century Bengal, if that’s what will keep him with her. Both women are seeking love and acceptance from the men in their lives and both are let down. Ironically, both men are equally shallow and self-serving and yet, these women want to be with them.

The fundamental difference between the two women's situation though is that while Chhoti Bahu really has no choice in matters concerning her life, Veronica has the option to carve her own destiny. She herself believes so till the sudden eruption of love for a man who doesn't see her as anything more than a casual fling. She is living alone in a foreign land, a photographer by profession (though we rarely see her at work) and a free-spirited, impulsive girl who spends much of her time drinking and dancing in the company of men. In short she is a wild child and as Bollywood cliches go, too unpredictable for marital stability and conformity.

Veronica's character is practically the mathematical opposite of her friend Meera's. Meera has come to London in search of her husband, who, we learn, has entered into a marriage of convenience and clearly doesn't want to have anything to do with her. Except she doesn't know this and dutifully follows him to England, only to be dumped. I was thoroughly confused about why and how Meera got conned into this alliance, but the screenplay doesn't bother explaining. She's wandering the streets and is found crying in a restaurant toilet by Veronica who takes her home and tells her she can stay put for as long as she likes. This act, while it's a plot contrivance to throw the two girls together, is in fact telling of Veronica's recklessness and, equally, her innate goodness.

The backstory for her recklessness involves divorced parents -- another cliche that products of broken homes are unsuitable for marriage, and a reminder of the Maya character from Ijaazat who loved the man first, but was just too unpredictable to become his wife (although Gulzar at least gave her a fair chance, unlike in this case) and ultimately she had to be sacrificed (literally) to resolve the crisis. Ijaazat, being a far more complex film than Cocktail, doesn't offer a pat ending. All the characters suffer, but none is really responsible for the situation. Also, its protagonists are far more interesting than the ones on offer here. 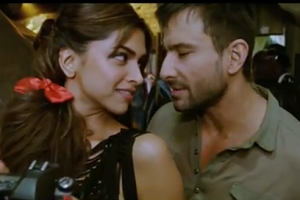 Meera, the staid, virginal, god-loving and fastidious one (her parents aren't divorced, but died respectably in a car crash, thereby explaining her 'normalcy') quickly transforms Veronica's dump into a home, scoring her first point as talented homemaker. She cooks, she cleans, she prays and, above all, she doesn't fall for the charms of playboy Gautam who has spotted her first, but settles for the easier-to-get-into-bed Veronica with whom he quickly embarks on a no-strings-attached relationship.

Now let's pause to dwell on the Gautam character for a moment. Meera's original reading of him -- a pig who is merely looking for an easy roll in the hay -- is pretty accurate. If he weren't the hero of the film, he would be classified as a pervert or a sex-addict or a womaniser because all we see him doing for the initial part of the film is using his (forced) charm to hook various women and then exchanging notes with his uncle (Boman Irani), evidently proud of his nephew's score. Gautam's mother, who lives in Delhi (stereotype of the loud Punjabi mother which Ms. Kapadia plays up to the hilt), meanwhile is pestering him to get married and keeps sending photographs of prospective girls which he promptly tosses out of the window -- this schizophrenic disconnect is accepted with benevolence in the warped world of Hindi cinema.

So far, all the players are in character. Then Gautam's Punjabi mother lands up at his doorstep while he's wearing a Viking costume and dancing to "Sheila ki jawaani" (lipstick, gaudy eye make-up and all) with the two girls taking pictures and videos of his performance. By this time, Meera has thawed a little and doesn't mind being around the man -- after all he did come home with groceries the other day, didn't he? And so we have the first twist in the tale when Gautam introduces Meera as the girl he's in love with -- because Veronica is just too bold and hence unworthy of being presented to mommy dearest. Everything about her -- starting with the name -- is wrong. Veronica doesn't mind the charade because she doesn't care. Meera is uncomfortable, but plays along. Gautam is happy because he gets to have the best of both worlds.

Cut to Cape Town, where they troop off for an impromptu holiday, Mummyji in tow (who gave her a visa?), and Gautam is forced to stay away from Veronica and spend time with Meera. Mummyji puts the official seal on her son's selection by giving Meera her gold bangles which the girl accepts after a mild protest (really!!). Simultaneously, she's whining about her own unworthiness and why no man is likely to want her -- reminiscent of Jaya Bachchan's wallowing ('Kaun karega mujhse shaadi', a line Meera repeats almost verbatim) in Silsila where she sends Amitabh Bachchan on a guilt trip and forces him to marry her. Similarly, Gautam starts listing out Meera's qualities and before you can blink, he has fallen for her and she for him.

Veronica, meanwhile, has realised that she loves Gautam too -- but the writer (Imtiaz Ali) never put his weight behind her and hence her attempts to 'transform' into an acceptable candidate appear pathetic. She feels jilted, and rightly so. Suddenly, after being infantile all along, Gautam starts behaving like a responsible adult who can't stand Veronica's childish plea for his affections anymore and walks out on her. Veronica throws Meera out in a fit of righteous rage. Meera doesn't utter a word -- in keeping with her sacrificial goat avatar. She wanders back to the estranged husband to enlist him in a harebrained scheme to throw Veronica and Gautam together, while the latter continues wooing her from a polite distance.

Veronica, meanwhile, goes back to her hedonistic life with a vengeance and meets with a serious accident -- the Bollywood concept of 'natural justice' chastises her for her waywardness. Gautam feel 'responsible' towards her and nurses her back to health -- if this ploy wasn't necessary to redeem Gautam's character, Veronica would have been killed literally too. His love for Meera stands firm. Only by now, Veronica has learnt her lesson. The man she loves must get the woman he loves and so they both set off for Delhi with some help from Meera's husband -- with whom she has briefly lived without being 'touched' and hence continues to retain her sparkling virginity.

Gautam, having sowed his wild oats for years is ready for domesticity and Meera is willing to accept the man regardless of his philandering ways -- with the typically Indian assumption that marriage will fix everything. Veronica will probably play bridesmaid at their wedding and either hang around on the periphery of their married life or go back to her job in London, chastised and reformed, ready to make herself available for another suitable match like Gautam.

For ultimately, what else is there for a woman to do but settle down to matrimony and make healthy babies? Is it any wonder that in film after film, independent women want to experience the heady feeling of absolute freedom in the days leading up to their wedding, convinced that they will lose that vitality forever at the altar of domesticity? But the bigger question is, does the modern Indian women secretly yearn to be a doormat after all? Is she willing to suppress her personality to the cause of marriage and acceptance as defined by the man in her life? Isn't there any other kind of life that can be imagined for her? Or is this merely how the Indian male -- the gender that obviously dominates the filmmaking process -- expresses his anxiety by reiterating the stereotype of male superiority and female acquiescence?