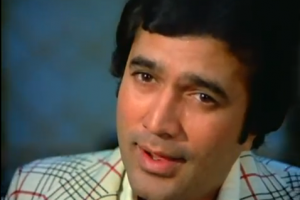 Rajesh Khanna must have known exactly how his obituary would read, regardless of the circumstances of his life and death.

These immortal words would play in a loop all day long and countless women and thousands of boys named after him, would shed tears for a man they knew intimately, loved obsessively -- as he serenaded gorgeous women, sang melodies that gave their own mundane lives meaning and then broke millions of hearts by marrying a 16-year-old sensation called Dimple Kapadia.

While Anand was undoubtedly his career-best performance, the Rajesh Khanna who drove those women into a frenzy to write him letters in blood and propose marriage standing outside Aashirwad, the famous Bandra landmark, was the soft, romantic, sensitive hero of films like Aradhana,Safar, Kati Patang and Amar Prem, doomed to die or suffer gallantly. If you were to map his career, it would have to be in terms of the dramatic rise and fall of this phenomenon called Rajesh Khanna, and through the innumerable songs and memorable dialogues picturised on him. Of stylised mannerisms and limited acting skills, he was more a product of his image than pure talent, which propelled over a dozen films in just three years to box-office glory.

Recently, on a repeat viewing of Rituparno Ghosh's Bengali film Titli, one revisited the"Mere sapno ki rani" number from Aradhana which the filmmaker employs to set the nostalgic-romantic tone of Titli, complete with the lush hills of North Bengal and the toy train on which Sharmila Tagore once sat as Khanna wooed her. It's an iconic moment, never mind the unromantic idea that Khanna and Tagore were never actually filmed together and the song is a montage of two sets of visuals -- him on location and her in studio shots! Such is the power of the song and its imagery, the obviously shoddy picturisation becomes irrelevant.

Aradhana propelled Khanna to superstardom -- a position he lost to Amitabh Bachchan due to his inability to nurture his career, or perhaps the sheer force of the 'angry young man' persona. But as the latter would himself state in years to come, the madness of Khanna's stardom was unprecedented and unparalleled. They acted together just twice, in Hrishikesh Mukherjee's Anand and Namak Haram. Between these two films, the fortunes of the two stars underwent dramatic reversals. By 1973, Khanna's career had already peaked after a remarkable string of hits, although nobody could have guessed how sudden the fall would be, while Bachchan's star was on the ascendant, after a long struggle.

The Rajesh Khanna story is incomplete without accounting for the contribution of his singing voice, Kishore Kumar and composer R D Burman, who collaborated on many of his timeless melodies, in films like Amar Prem, Kati Patang, Mere Jeevan Saathi and Aap Ki Kasam. Khanna acted with all the leading ladies of the time, but the ones with whom he formed an enduring screen pair were Sharmila Tagore in the middle-of-the-road films like Safar,Amar Prem and Aavishkar, and Mumtaz in the more massy ones like Do Raaste, Sachcha Jhutha, Apna Desh and Dushman.

After a slew of unsuccessful films in the mid to late '70s, Khanna's career got a new lease when he moved on to playing older characters in films like Avatarand Amrit and then a brief revival on account of his on and off-screen alliance with Tina Munim in Souten. But it was a short burst, and before long the star had waned, once again relegated to a reclusive life -- particularly in the aftermath of his brief political career in the 1990s.

In the late 1990s, Shobhaa De wrote an unflattering piece about Khanna in her autobiography Selective Memory, referring to him as 'pimple-faced', 'petulant' and 'conceited' recalling how speculation of his marriage to long-time girlfriend Anju Mahendroo launched the first issue of Stardust in 1971. It was in connection with this book that I called Khanna for a reaction -- an unsavoury task, considering the provocation, done reluctantly in the line of duty. He was polite and expressed his desire to grant an interview. But the promise remained unfulfilled -- it was a long shot to begin with, given his eccentricities.

Just as well. Rajesh Khanna, like most other movie stars, is best preserved in one's memory as an image reflected off the screen -- chinky eyes, fetching smile, patent mannerisms and guru kurtas walking into the sunset singing,"Zindagi, kaisi hai paheli hai..." As Babumoshai famously says at the end of Anand, "Anand mara nahin, Anand marte nahin".