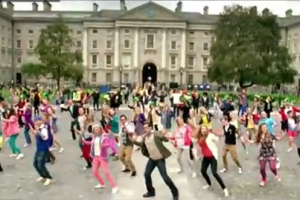 Ek Tha Tiger has become an all-time Bollywood blockbuster after collecting more than 210-crore rupees at the Box Office in 12 days of releasing. But it is not just the ETT team that is enjoying its success, Trinity College Dublin too is cashing in on the film’s success and planning to woo Indian students.

Trinity College Dublin’s campus formed the backdrop for one of the film’s key locations. The movie’s hit song Banjaara too features Trinity’s campus.

Student volunteers from Trinity College Dublin were in Kolkata, the capital city of West Bengal to host a special screening of Ek Tha Tiger. The objective was to develop Trinity’s academic impact on both the local and global stage.

The special screening was hosted by the university as it celebrated ten years of the Suas Educational Development programme – a charity in Ireland that addresses educationally disadvantaged in India, Kenya and Ireland.

The university offers students a range of undergraduate and postgraduate courses where they can benefit from a multicultural student experience, Ohlmeyer added.

The university is currently touring India and is planning to host screenings of Ek Tha Tiger in cities including Delhi, Mumbai, Bangalore and Chennai to woo potential students to Dublin, Ireland.

The screening was attended by more than 200 school children, their parents and teachers.

Trinity College Dublin has strong links with India, according to the university.

The move comes just as the UK tightens the visa application process for student applicants in a bid to tackle visa abuse.