Prime Minister Manmohan Singh shared his serious concerns regarding the corruption allegations in the 2010 helicopter contract between India and Anglo-Italian company AgustaWestland with David Cameron on the second day of the UK PM’s stay in India. 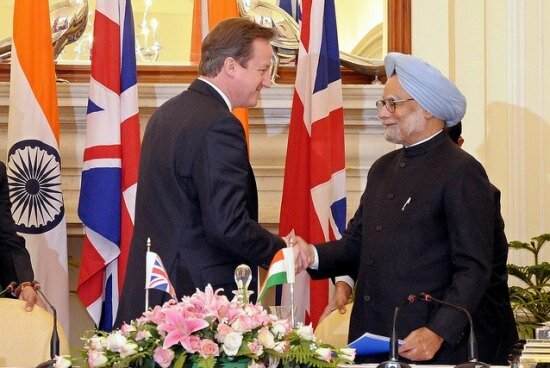 Singh told Cameron that his government is very seriously concerned about the unethical means used in securing the 2010 contract for AgustaWestland helicopters.

Finmeccanica chief executive Giuseppe Orsi was arrested in Italy as part of an investigation into alleged corruption and India has sent senior officials to Rome this week to conduct its own investigations into the allegations.

Singh told Cameron that the Indian government has sought an explanation from the company by February 22 to examine if the contractual provisions on unethical practices and the Integrity Pact were violated.

“I have sought full assistance from the UK in this case. Prime Minister David Cameron has assured me of the cooperation of his government in the investigations,” Singh told the media.

Corruption allegations involving AgustaWestland was at the heart of the Singh and Cameron’s meeting.

The Indian leader also discussed other crucial issues -- such as the bilateral relations, changes needed in UK’s visa regimes and Britain’s support in forging India-EU trade agreement – with his British counterpart.

Singh also told Cameron that India is ready for increased British investments, including in infrastructure and energy.

“We have asked our officials to explore British participation in India’s national manufacturing and investment zones and in a possible industrial corridor in the Mumbai-Bangalore sector,” Singh said.

Singh also emphasised the need for a UK visa regime that will facilitate greater movement of people between UK and India so that this cooperation can be further energised. Responding to the Indians’ growing concerns around UK’s visa, the UK introduced a super priority visa service for Indians. The service will start from March 2013 and will issue visas in a single day for frequent visitors to the UK.

He thanked Cameron for the UK’s support for India’s full membership of the Nuclear Suppliers Group and other multilateral export control regimes.

The two agreed to further intensify their cooperation in combating terrorism.

“The Prime Minister’s visit is another milestone in our bilateral relations,” Singh concluded.