British Prime Minister David Cameron has begun his three-day visit to India on Monday with financial capital Mumbai as his first stop. Improving mutual trade partnerships, allaying India’s concerns about UK visa rules and pushing the Eurofighter Typhoon sale to India are high on his agenda. 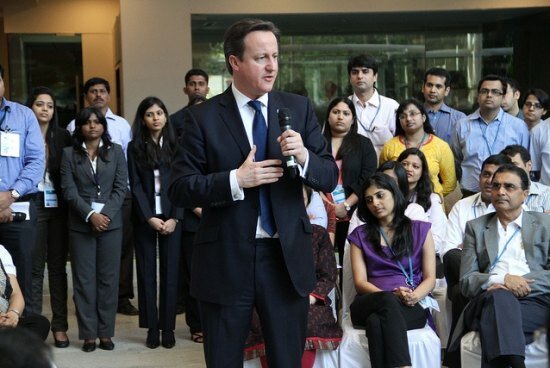 The delegates include high-profile British brands such as Rolls-Royce, BAE Systems, BP as well as the British Museum, British Council, the FSA, Oxford Business Group, KPMG, London School of Economics and London's Underground, among others.

Cameron will work to boost bilateral trade with India. In an interview to Hindustan Times, he said that he wants to forge one of the “great partnerships” of the 21st century with the emerging Asian powerhouse.

Cameron’s main objective of boosting trade relations with India comes in the middle of the AgustaWestland contract controversy. AgustaWestland, an Anglo-Italian chopper company has been alleged that it was involved in corruption with Indian intermediaries to secure an Indian government contract.

India has begun the process to cancel the contract and has sent senior officials to Italy to investigate the allegations. A cancellation could mean hundreds of job losses in AgustaWestland’s UK site in Somerset.

Another agenda high on Cameron’s visit is to address the concerns of Indians around UK’s toughening and complex visa regime.

Recent reports have shown that amid tightened visa rules and Home Office’s move to revoke London Metropolitan University’s license to issue student visas has led to a fall in the number of genuine Indian students in the UK.

Ahead of his visit, Cameron told that genuine Indians with a confirmed university seat and good knowledge of English are very welcome in the UK. He added that there is no limit to the number of Indian students that can come to the UK, finish their education and seek degree-level work in Britain.

This is Cameron’s second visit to India as UK prime minister and he is expected to meet Indian prime minister Manmohan Singh and president Pranab Mukherjee. He is also likely to try out authentic Indian curry, especially Kerala fish curry, he said.

India had shortlisted a French company Dassault Rafale’s jets and UK-backed Eurofighter Typhoon jets for its £9bn purchase. Eurofighter jets are made in part by BAE Systems in the UK – which is part of Cameron’s delegation team to India.

India did not finalise its deal with Dassault during Hollande’s visit and Cameron is hopeful to seal the Eurofighter Typhoon deal with India in his visit.