Leicester residents can now apply for an Indian visa locally after the first Indian Visa Centre opened its door for the public at the city’s popular community services hub, Peepul Centre in Belgrave. Leicester’s own Indian visa service agency is seen as a triumph of a 20-year campaign for the same. 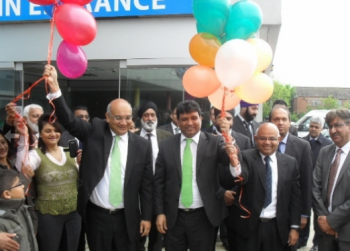 It will cater to the large Indian community living in the city. Indian-origin people form more than 28% of Leicester’s population. Until now, Leicester residents had to travel to Birmingham or London for Indian visa or passport services.

The visa agency was launched by the Indian High Commission after it revealed the plans to establish the centre in Leicester back in May this year. The centre was officially opened by Leicester East MP Keith Vaz and Indian Consul General Vyragyam Siddi Ramalingam on November 29, 2013.

Vaz billed the centre’s launch as a “historic day” for the British city after 20-year long campaign.

“I cannot believe that after so many years of campaigning it has finally become a reality. It is a wonderful gift to Leicester,” Vaz said.

The Home Office Biometric Centre in the City Centre and now the new Indian visa centre will make Leicester “the hub of the East Midlands”, he added.

The Indian visa centre is likely to attract residents from neighbouring Loughborough, Coventry, and Northampton areas which in turn will help bring more trade for the local businesses on the Golden Mile. It is also likely to ease the pressure off other two Indian visa centres (London and Birmingham).

The centre will initially be opened once a week each Friday between 10am to 2pm and thereafter will open on additional days depending on the demand.

“We welcome this new development for which I must acknowledge Keith Vaz’s efforts to help the Leicester Indian community in particular,” said Peepul Centre’s chairman Anil Bhanot OBE.