Diwali 2015 is celebrated on Wednesday, November 11th 2015 and Indians in the UK celebrate with Diwali lights switching-on ceremony, community get-togethers, traditional celebrations, fireworks, and traditional sweets across London, other English towns, Wales and beyond! The spirit of Diwali in the UK is evident in the fact that Leicester City Council's Diwali lights switch-on ceremony attracted a record 37,000 people. 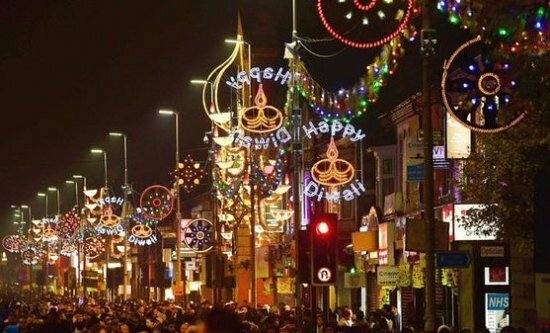 Diwali, the festival of lights and colours, is one of the biggest and most important Indian festivals celebrated by Indians across the globe.

As seen in the picture above, the Diwali lights swtch-on event at Leicester city's Golden Mile area on Belgrave Road marked the kick-off of Diwali 2015 celebrations here in the UK. Each year, the Diwali lights swtching on event attracts 35,000 people and is thought to be one of the biggest Diwali celebrations outside of India. But this year was even special with the event attracting more than 37,000 people. 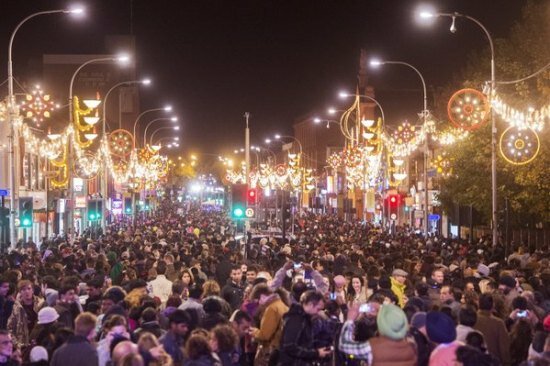 Leicester Diwali Switch-on on Sunday
Assistant city mayor Cllr Piara Singh Clair said: “Leicester’s Diwali Day celebrations are always special and this year they promised to be better than ever."

Stage artists for the Diwali lights switch-on event in Leicester included Navin Kundra, a singer/song-writer who – with six number ones in the Asian music charts – is described as the UK’s fastest-rising Asian singing-sensation. 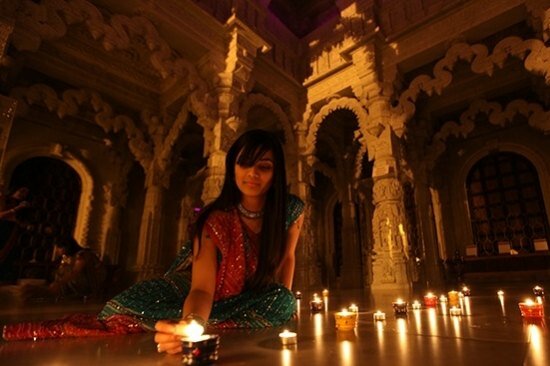 London Indians' most important place of worship Swaminarayan Temple in Neasden will continue its heritage of grand Diwali celebrations this year too. The temple is known to host the largest and grandest Diwali and Hindu New Year celebrations in the UK.

On Wednesday, November 11th, 2015, Swaminarayan Temple will have a Chopda Pujan at the Haveli Assembly Hall between 6.00pm and 7.30pm. It will be followed by a spectacular fireworks display between 8.30pm to 9pm at Gibbons Park (behind Swaminarayan School). The temple will be open for Darshan all day until 8.30pm and hot pure vegetarian snacks will be available from 4pm onwards at food stalls.

To those relying on public transport, a special Diwali Day Bus Service from Neasden Station to the Mandir will operate every 15 minutes from 3.55pm to 5.30pm, when it will increase to every 12 minutes until 7.20pm. It will then be suspended until after the fireworks display has ended. The service will re-commence running every 12 minutes from the Mandir to Neasden Station until last the bus at 10.00pm.

UK Prime Minister David Cameron took to YouTube to wish everyone in the UK celebrating Diwali and happy and prosperous one. He took the Diwali festival as an occasion to thank the work and contribution of Hindus, Sikhs and Buddhists that make up Britain's rich and varied communities and all the Indians in the UK fir their contributions from NHS to Armed Forces to schools to businesses.

He ended his 1:38 long video talk with the traditional words: "Shubh Diwali".

Bollywood celebs celebrate Diwali amid work
Meanwhile Bollywood celebs are also posting on Twitter their Diwali wishes to their fans and audience. Sensational actors and on-screen couple Deepika Padukone and Ranbir Kapoor were seen creating traditional rangoli decorations and celebrated Diwali together amid the promotions of their upcoming film Tamasha. 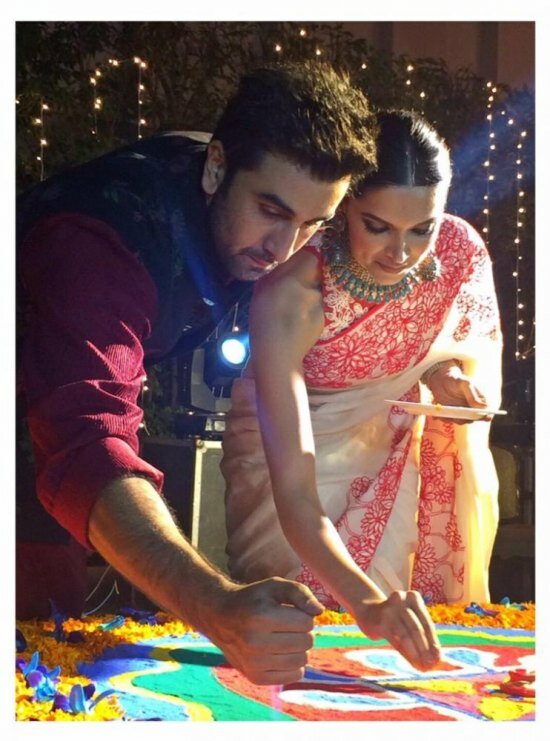 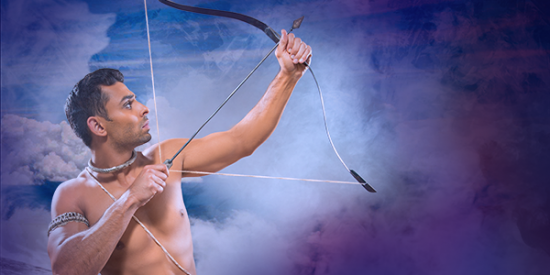 As part of Leicester’s Diwali day revelries, Phizzical Productions is creating a performance and visual arts experience celebrating the arrival of Rama, Sita and Lakshman.

The Diwali day celebration is based on the Ram Lila and features a specially designedPushpaka Vimana, the first mention of a flying chariot in the Indian sacred scriptures. Choreographed by Subhash Viman, the performance looks at the psychology of the citizens as they anticipate the arrival of Rama, Sita and Lakshman. Their arrival leads to a breath of silence as the citizens finally glance upon the beloved trio.  The rapturous celebration begins after Rama’s coronation.

A fusion of eastern and cinematic music has been arranged by Leicester based emerging composer Devesh Sodha. Live instrumentations by Rishii Chowdhury on tabla, Akash Parekar on sitar and Dr Samyami Chowdhury-Sarma who will be singing verses from the Veda, curated by priest Shreeman Hemang Bhatt, see a marriage of traditional forms with contemporary imagination. The composer and musicians are part of Phizzical’s Youth Music programme developing new music leadership.
The design of the Pushpaka Vimana is influenced Sita’s rings, bangles and jewellery that dropped from the sky in her attempt to leave a trail for Rama. They also represent the seven upper heavens, the seventh avatar of Mahavishnu and the seven kandas(books) that form the Ramayana.

The Pushpaka Vimana will be adorned with LED lights programmed to dance in tandem with a coterie of dancers and live musicians in a 15-minutes looping sequence.  The themes from Ram Lila will embrace today’s technology in the finale. Leicester’s citizens will have an opportunity to take a ‘selfie’ with performers who are dressed as Rama, Sita and Lakshman, sharing this unique memory world-wide.

The First Minister of Wales, Rt Hon. Carwyn Jones hosted Diwali celebrations on the evening of Monday 9th November at the Wales Millennium Centre. The traditional evening closed with firework display which will light up the sky over Cardiff. The event has been organised with the support of the Honorary Consul of India in Wales, Mr Raj Aggarwal, and the Wales Millennium Centre.

Raj Aggarwal said: “The celebrations for Diwali this year at the Wales Millennium Centre are going to be spectacular. It’s a great honour that the First Minister will host the event in presence of distinguished guests which will include, Lord Lieutenants, High Sheriff, civic leaders, Lord Mayors, Senior Ministers and assembly members, captains and leaders of the industry, commerce and business, Vice chancellors, government officials, and heads of universities, students, community leaders and the Indian diaspora.

The event included messages from the First Minister and Honorary Consul, cultural entertainment, food from different states of India, prepared by the catering staff at WMC in collaboration with celebrity award winning chef, Stephen Gomes.

The iconic Wales Millennium Centre was lit up with the Indian flag colours and the Diwali decor will include Rangoli design on the concourse and welcome screen with Diwali inscriptions in English, Welsh and Hindi.

Wales Millennium Centre in Cardiff Bay is also hosting another Diwali celebrations this year in partnership with Wales Tamil Sangam. The Centre will come alive with the colours, sound and positivity of Diwali for the second consecutive year.

Promising its usual electric atmosphere and warm welcome, Diwali will take over the Centre with music and dance performances, family craft workshops and a spectacular fire and drumming parade outside in Roald Dahl Plass. And of course, there will be fireworks to give a rousing finale to the festival of lights.