First the good news. Krrish 3 has by far the best special effects one has seen in an Indian film; Dhoom 3 better pack enough fire-power to outdo the mind-boggling wizardry of chameleons morphing into human forms, gravity-defying spins through Mumbai's streets and a couple of breathtaking action sequences. Not to mention the villain’s den atop a Swiss mountain that James Bond would’ve been proud to decimate. 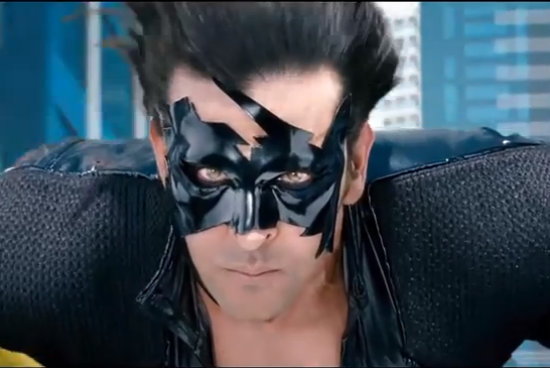 Hrithik Roshan as the superhero in Krrish 3
Image: YouTube still

I’d have liked an actor of Amrish Puri's class to be that lunatic, at once menacing and funny. Vivek Oberoi isn't that man. Puri’s Mogambo was not very different from Kaal in terms of his evil machinations. Remember how he dropped men into boiling cauldrons and laughed when their skeletons floated to the top? Yet it wasn’t scary because Puri and director Shekhar Kapur pitched these scenes firmly in the realm of the make-believe.

Here, the violence is too realistic to go down well with kids—a demographic the makers obviously care about. Which is why Krrish (Hrithik Roshan) rescues at least three of them and even sits down on a high parapet with one to exchange a bravery band—sure-fire merchandising strategy, and better than the in-film branding circus that the rest of it is, peddling everything from Bournvita (which has kept Rohit Mehra alive through three films) to a dry-cleaning brand via very tacking inserts for cars, TV channels, ketchup, burgers, inner-wear, malls and luxury watches.

Anyway, the point is, you can’t have apocalyptic imagery like a deadly virus being released in Mumbai with people running helter-skelter in a panic, burnt faces and cries of desperation, all done well enough to cause a couple of kids to scoot from the auditorium and others to turn their faces away. Of course the logic around it is strictly mumbo-jumbo––using DNA from bone marrow to make designer humans, channelling the sun’s energy to revive dead cells and so on.

And beyond it all is the other film that’s hitched to the superhero wagon, about the loving Indian family, their joys, sorrows, dinner-table conversations and excruciating song-and-dance sequences, which leaves you totally unmoved. Every time the narrative moves to this section, you start yawning and wish Kaal and his cohorts would come back with their slithering tongues and Kangna Ranaut’s delectably wicked Kaya.

It’s telling that while Kaya is actually meant to look plasticised it’s Priyanka Chopra’s Priya who's more artificial as Krrish’s love interest. Roshan Jr had carried off Koi Mil Gaya’s Rohit quite well, but two films later he’s reduced to parodying himself. As for the bronzed, oiled, taut torso of the other role, it’s nauseating rather than sexy to watch the man strut his stuff. He’s still a great dancer, but the spontaneity of his early work has give way to self-consciousness leading to an over-eager but under-whelming performance (notice how the veins in his temple throb in sync with the flare of his nostrils every time Krrish is taking off to save the planet).

Mention must be made of the humungous Krrish statue that the local politician installs as a token of appreciation for his vigilance. It sent a chill down my spine, cutting too close to the real-life drama of honouring heroes by commissioning enormous statues.

And suddenly it wasn’t a brainless fantasy anymore.