Navrangi Navratri 2016: UK Indians revel in the traditional magic of garba and dandiya in London

Navratri 2016 is here - so glam up in traditional colourful ghaghras and pull out those dandiya sticks! Celebrated from October 1st to 10th, this year too UK Indians are reveling in the magic of garba and dandiya in London. The UK's most traditional (and colorful) garba event – Navrangi Navratri 2016 - has kicked off at Brent Civic Centre, opposite Wembley stadium. In addition, Harrow, Watford, Kingsbury and Bethnel Green are also hosting dandiya nights from October 1st. 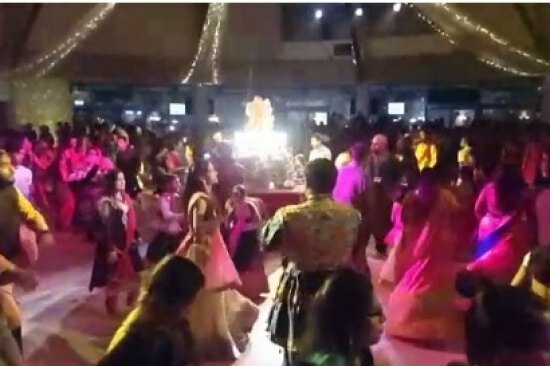 Navrangi Navratri garba and dandiya night events were held at Greenford Hall for the last three years but this year it was moved to Brent Civic Centre by organisers Red Lotus Events as Wembley is considered easier to commute. The London Wembley dandiya nights feature musicians from Rajkot, Ashish Dave on vocal with Pritee Varsani, the acclaimed folk singer to give UK Indians an authentic feel to their Navratri celebrations. The entrance fee for Navrangi Navratri 2016 at Brent Civic Centre is £5 per night (under 2s go free) and £45 for nine nights and Sharad Poonam.

Meanwhile, Greenford’s Jalaram Mandir is also celebrating Navratri this year like every year and is hosting Navratri Raas Garba for ten days.

Navratri, the traditional Indian festival celebrated for nine days by worshipping goddess Durga and by participating in colourful and fun-filled garba and dandiya dance nights. Every year, UK Indians glam up in their traditional Gujrati outfit and ornaments and bring their ornamental dandiya sticks to perform the traditional raas garba dance to traditional music as well as contemporary Bollywood garba songs. They also perform Durga Pooja, aartis and have maha prasaad organised by the sponsors.