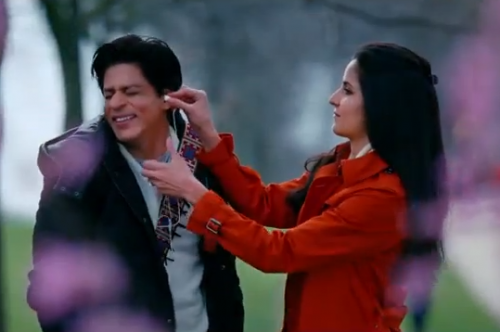 The spectacle of a haggard-looking hero in his mid-40s strumming a guitar on the streets of London seems like a pathetic attempt to turn back the clock.

That Jab Tak Hain Jaan's screenplay has so many holes, after a point you lose count. When and how did a waiter from London join the Indian army, rise to the rank of Major and was allowed by his superiors to go around diffusing bombs without protection, just to defy death? How many bombs are there in Kashmir, since the Major seems a very busy man? (His count by the end of the film is 108 and we aren't exactly in Iraq.) How is a rookie journalist let loose in high-risk situations without proper authorisation or even a basic crew? What happens to the father's character in the second half?  And the army job after the retrograde amnesia? The list goes on...

That Gulzar's words and A R Rahman's music have never sounded so insipid. Given the confusion of the script it's hardly surprising. Despite the promotional blitzkrieg, one can’t recollect a single notable number. Madan Mohan’s unused compositions, rendered by Lata Mangeshkar’s tired voice in Veer Zaara were infinitely superior to Rahman’s original soundtrack for this one.

That the only thematic justification for this three-hour saga is an irrational, guilt-ridden heroine who believes she may be the bearer of bad luck for her lover––the kind of complex filmmakers are often known to foist on their heroines. This idiotic Meera so reminds you of her equally uninteresting namesake in Cocktail, penned by another ‘sensitive’ writer called Imtiaz Ali.

That Namrata Rao may be the sharpest editor in the business, but her instincts are no match for self-indulgent cinema where every fake emotion is stretched in the hope it may look profound. Scenes drag on endlessly with Shah Rukh basking in the affections of two gorgeous women in the second half and the amnesia giving him an excuse to ham his heart out just like he did in Kal Ho Na Ho––remember how his death scene went on forever but couldn't achieve Anand’s emotional flourish?

That Yash Chopra was undoubtedly a giant of popular cinema and understood melodrama better than most others. But unlike his previous, Veer Zaara (far from his best work), which managed a semblance of genuineness despite dripping sentimentality, this is just a reworking of time-tested clichés and entirely devoid of soul. One is hard-pressed to recall a single moment of any resonance barring perhaps a brief guest appearance by Rishi Kapoor and Neetu Singh and that too, largely because of their effortless chemistry, which overshadows what the lead trio can manage through the entire three hours!

That Jab Tak Hai Jaan notwithstanding, film fanatics of my generation will keep revisiting Waqt, Deewar, Kabhi Kabhie, Trishul, Chandni and Lamhe to appreciate the oeuvre of a filmmaker who understood the endless human yearning for love and possessed the art of expressing it in myriad, gorgeous ways.