Maha Kumbh Mela 2013 kicks off as millions bathe in Ganges

Millions of Indian devotees have taken a dip in the Ganga-Yamuna confluence at Allahabad, India starting from as early as 5am on January 14, to mark the beginning of Maha Kumbh Mela – one of the biggest religious gatherings. 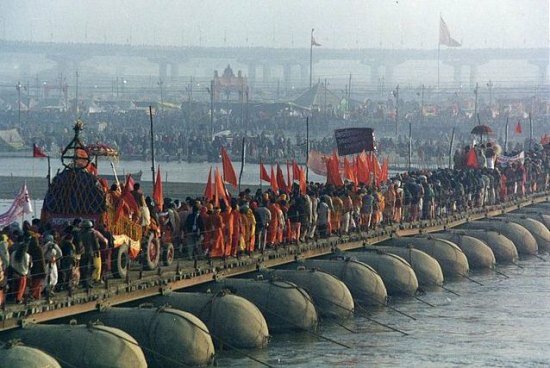 Millions take a dip in Ganga-Yamuna confluence in Allahabad to ring in the beginning of Maha Kumbh Mela 2013
Image: Wikimedia Commons (Kumbh Mela 2001 - by Yosarian)

Kumbh Mela takes place once in 12 years in Allahabad and lasts for two months but this year’s mela is called Maha Kumbh Mela as it only occurs once in 144 years after 12 purna kumbhs. The Kumbh Mela 2013 will end on March 10.

Reports estimated that more than 110 million people are expected to bathe at the “Sangam” – the area in Allahbad where the holy rivers meet. According to Hindu religious belief, bathing at the Sangam will wash away their sins.

In order to accommodate the millions expected in Allahabad, several police checkpoints, temporary hospitals and toilets have been set up. This year, the authorities have made new arrangements such as CCTV systems as well as temporary roads and bridges.

The Kumbh Mela, which attracts millions of foreign tourists, is expected to generate 120bn rupees with the authorities will spend about 11bn rupees or £130m.

Non-religious and environmental groups have raised concerns about the water pollution arising from millions of devotees dipping into the Ganges.

Health concerns have also been raised as many devotees drink the water from the Ganges where they bathe and fill their bottles to give water to young children.

The origin of Kumbh Mela can be traced back to Hindu mythology where many devotees believe that gods and demons fought over a pitcher (Kumbh) of nectar that could make them immortal and amid this fight, several drops of the holy nectar fell in Allahabad, Ujjain, Haridwar and Nasik – all of which achieved holy status. Kumbh Mela is held in all these four cities.

At the last Kumbh Mela in 2001, as many as 110 million pilgrims participated and the gathering reported no major accident or mishap. As this year is a Maha Kumbh Mela year, more people are expected to participate.